UK Release of "The Heir of Night", Plus "Launch-a-thon" 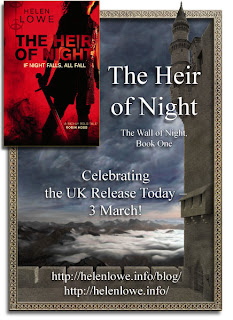 Helen Lowe's "The Heir of Night" was launched in the UK at 8 pm last night, NZ time and despite earthquake, aftershocks, destruction, liquefaction and dust, Helen is going to be mark the occasion on her blog with a giveaway of three, signed, UK first editions of Heir (a large-format trade paperback not available in NZ)--the recipients to be drawn who comment on the official launch post that was 'live' from 8 pm last night, Thursday 3, through to 8 pm Friday 4 (so still plenty of time to get your comment in.)

But, there is more. Recognizing the severity and trauma of the Christchurch earthquake, Helen is also doing a launch-a-thon: she will be donating a dollar for every person who comments on the official launch post (or in fact any of her March 3 posts on Helen Lowe on Anything, Really) to the NZ Red Cross 2011 Earthquake Appeal, up to a maximum of $500.
So get in there, comment and show your support to earthquake stricken Christchurch---and be in to win as well.
Posted by Beattie's Book Blog at 6:43 am