The three books shortlisted for the 2011 Science Book Prize have been announced today (29 March) and the topics include New Zealand’s rarest parrot, the mystery of the Earth’s magnetism, and an exploration of climate change.

The judges Professor Jean Fleming, Professor Michael Corballis and Dr Bryan Walpert said “The entries for the prize were a wonderful mix of books, with the authors telling science stories in a clear and accessible way.”

The three shortlisted titles for the 2011 Royal Society of New Zealand Science Book Prize are: 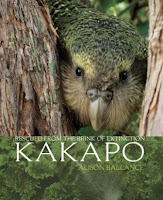 • Kakapo: Rescued From the Brink of Extinction by Alison Ballance (Craig Potton Publishing)

• Poles Apart: Beyond the Shouting, Who is Right about Climate Change? by Gareth Morgan and John McCrystal (Random House)

The Royal Society of New Zealand, our national science academy, established the biennial prize for popular science books in 2009 to celebrate the very best in this genre. It aims to encourage the writing, publishing and reading of good and accessible popular science books.

The winner of the inaugural Science Book Prize in 2009 was Rebecca Priestley for her book The Awa Book of New Zealand Science.

The 2011 overall winner will be announced at the Auckland Writers and Readers Festival on Friday 13 May 2011.
Posted by Beattie's Book Blog at 5:34 pm