The Magician's Nephew will be fourth Narnia film

Prequel to The Lion, the Witch and the Wardrobe will be next CS Lewis novel to be adapted for the big screen, reports say 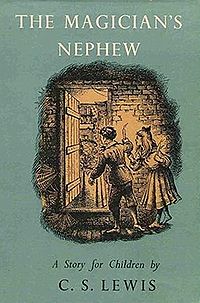 The makers of the Narnia films are to head back to the start of the story in their efforts to carry the series forward. A report in the Christian Post says prequel novel The Magician's Nephew (cover of original edition above) will be the next CS Lewis children's story to be adapted for the big screen.


The move would mean a return for the White Witch, played by Tilda Swinton in The Chronicles of Narnia: The Lion, the Witch and the Wardrobe, since Lewis's later novel explains how she came to settle in Narnia. Even though her character was destroyed in the first film, The Magician's Nephew goes back to a time before the first film and tells the story of how the White Witch originally came to Narnia. It is expected that Tilda Swinton will reprise the role.

The Magician's Nephew is the sixth book published by Lewis, but is the first chronologically. It tells the story of how Narnia was created, revealing the origins of the wardrobe and other items first introduced in The Lion, the Witch and the Wardrobe.

"We are starting to talk to Fox and talk to the CS Lewis estate now about the Magician's Nephew being our next film," said Michael Flaherty of Walden Media, which owns the screen rights to the Narnia series. "If we can all agree to move forward, then what we would do is find someone to write the script. So, it could still be a couple of years."

The Narnia films have produced ever-diminishing returns at the box office since The Lion, the Witch and the Wardrobe debuted with a spectacular $745m (£457m) in 2005. The Magician's Nephew is said to be the series' second most popular book, so producers are hoping it may return the franchise to its glory days. "I love the Magician's Nephew because it's a great origins story. You get to learn so much about where the wardrobe came from, where the lamppost came from, where Narnia came from," said Flaherty.

Many fans of the series had expected The Silver Chair, which continues the story of The Voyage of the Dawn Treader's Eustace, to be the next novel to be filmed.
Posted by Beattie's Book Blog at 7:08 am