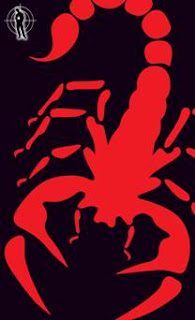 The Alex Rider book series, by world-renowned and multi-award winning author Anthony Horowitz, comes to a thrilling conclusion this month with the release of the final instalment, Book 9: Scorpia Rising.

The gripping final mission promises to shock and surprise by bringing together Alex Rider's old enemies to frame the teenage superspy in an unstoppable plot of revenge, from which he can never return.

Pursued from Europe to North Africa and Cairo's city of the dead – this is the twistiest and most deadly plot of any Alex Rider mission yet, and will reveal Smithers' ultimate gadget and see the shock death of a major character.

Released this week, readers can finally get their hands on the very last instalment of the series, with the last chapter destined to be an instant hit.
Posted by Beattie's Book Blog at 10:48 am