The Daily Beast
by Allen Barra

Allen Barra writes about sports for the Wall Street Journal and the Village Voice. He also writes about books for Salon.com, Bookforum, and the Washington Post. His latest book is Yogi Berra, Eternal Yankee.

James Joyce might have written the greatest Irish novel, but J. P. Donleavy certainly wrote the funniest, says Allen Barra in his review of this outrageous classic, The Ginger Man. 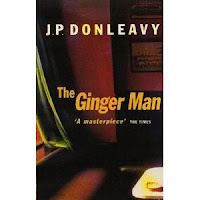 J.P Donleavy's The Ginger Man, the funniest novel in the English language since Evelyn Waugh and the wildest since Flann O'Brien went on the prowl, is being reprinted, with an introduction by Jay McInerney, by Grove Press 55 years after its publication, and not a minute too soon. Any time The Ginger Man is difficult to find, the degree of lusty, audacious black humor in English language literature drops to an alarmingly low level. Not that the most popular cult novel of post-World War II American (or Irish-American, if you prefer) letters has ever been in danger of going away.

Donleavy's first and most enduring work has sold in the millions and been translated into at least two dozen languages, acquiring such diverse fans as Norman Mailer and V.S. Naipaul, who described it as "comic, dirty, and delightful," and making its protagonist, Sebastian Balfe Dangerfield, the most unlikely of modern literary icons. (Ever year or so, there are rumors it will finally be made into a film; the most recent star to have his name connected with the project is Johnny Depp.)

The Ginger Man snuck in at No. 99 on the Modern Library's Best 100 Novels of the Twentieth Century; one can almost hear Dangerfield's snicker at having finished just ahead of Booth Tarkington's starched-collar museum piece, The Magnificent Ambersons. 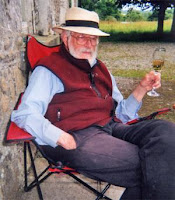 James Patrick Donleavy—either "Mike" or "Paddy" to his friends, according to which Dublin bookseller you talk to—was born in Brooklyn in 1926 to Irish immigrant parents and raised in the Bronx.
(Pic left - J P Donleavy at home in County Westmeath - The Independent).
He has lived in Ireland since 1972. In between, he was expelled from Fordham Prep for holding a fraternity meeting in a saloon (it was their first and last meeting), cut grass at Woodlawn Cemetery near Herman Melville's grave, boxed former middleweight champion ("Raging Bull") Jake LaMotta at the New York Athletic Club, served a stint in the Navy, and attended Trinity College Dublin on the GI Bill, where he began painting.
Inspired by the antics of a fellow American student named Gainor Crist, he turned to fiction; the title of his first book, though uncredited, is believed to be taken from a letter written by Jack Yeats in 1906—"I believe that all fine pictures, and fine literature too, to be fine must have some of the living ginger of Life in them."

Full piece at The Daily Beast.

And story in The Independent, August 2010
Posted by Beattie's Book Blog at 8:49 am

Sounds interesting. I've never heard of it, but I added it to my wishlist!

I read "the Ginger Man" a looong time ago ( think 4 decades back) and if I hadnt shortly afterwards read
"At Swim Two Birds" I would've given up on Irish humourous fiction entirely. I think it a crass & misogynist sad -as in pathetic- tale...but I'm not of Irish descent-