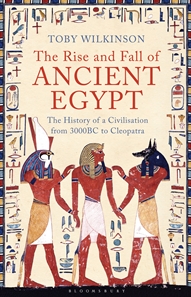 Bloomsbury's The Rise and Fall of Ancient Egypt: The History of a Civilisation from 3,000 BC to Cleopatra has won this year's £3,000 Hessell-Tiltman Prize for History.

Written by Toby Wilkinson, the book was commended by the judges for its "boldness, vivacity and authority".

Chair of judges Richard Davenport-Hines said: "We were captivated by Wilkinson's book . . . in describing remote societies, [he] has a deceptive lucidity which belies the precision of his expertise. His subject matter and his sensibility are both unusual."

The prize is awarded annually by English PEN for a work of popular history. Director Jonathan Heawood said: "We are proud to be associated with the Hessell-Tiltman Prize. PEN stands for the freedom to write and without histories like Toby Wilkinson's study of ancient Egypt we wouldn't know where we stand today. At a time when the future history of Egypt is being drafted before our eyes, the need to look freely at our past is more important than ever".

The prize will be awarded on 12th April as part of the English PEN Literary Café programme at the London Book Fair.
Posted by Beattie's Book Blog at 7:13 am