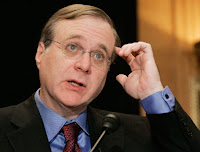 Microsoft co-founder Paul Allen paints an unflattering portrait of Bill Gates in a new book,
Idea Man: A Memoir by the Co-founder of Microsoft, accusing his former partner of scheming to grab his Microsoft shares while he was recovering from cancer. Allen says in the book that he has not received enough credit for Microsoft’s work, but people at the company are confused by his portrayal of events: They say he puts himself in meetings he did not actually attend. In a statement, Gates said, "While my recollection of many of these events may differ from Paul's, I value his friendship and the important contributions he made to the world of technology and at Microsoft.”

Read it at The Wall Street Journal
Posted by Beattie's Book Blog at 9:09 am