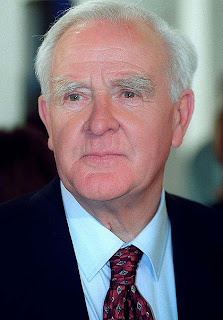 JUST when everyone felt pleased that the Australian author David Malouf had been nominated for the £60,000 Man Booker International Prize, another finalist - the espionage thriller writer John le Carre - spoilt the show.

As the judges named the 13 finalists at the University of Sydney, the British author of The Spy Who Came in from the Cold and Tinker Tailor Soldier Spy issued a statement through his literary agent, Curtis Brown, saying he would not accept the award if he won, becoming the first author ever to withdraw.

The biennial award, which, like the Nobel prize in literature, goes to a fiction writer for his or her body of work, will be announced for the first time in Australia at the Sydney Writers' Festival on May 18.
Posted by Beattie's Book Blog at 12:12 pm

Nice for him that he can afford to. Most authors I know would leap at the chance to win prize money like that!