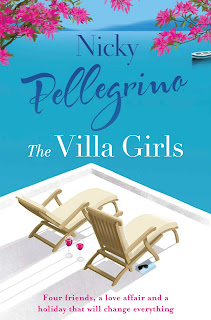 More often than not things don’t turn out the way I plan them. I remember when my first novel Delicious was published in the UK and emblazoned on the cover I found the words, “the year’s most satisfying romance”. I’m sorry? Romance? I’d had absolutely no idea that’s what I’d been writing.

Over the years I continued producing stories about friendship, family and food set between Italy and England, books I categorised as contemporary women’s fiction but other people preferred to call romance or chick lit.

So when I embarked on my latest release, The Villa Girls (Orion, $39.99) I decided it was time to write a proper romance. A really good love story. On purpose.
It didn’t go that well. Crucially what I realised very early in the proceedings was that I didn’t have the faintest idea what made one person fall for another. Was it timing? Need? Fate? Lust? Or something else entirely?

Research was necessary. As we were driving along one evening I asked my husband of 12 years, ‘What do you think it was that made us choose each other, fall in love and stay together so blissfully my darling?’
And he replied without taking his eyes from the road, “You just latched on didn’t you?’

No one else was much help either. Friends and family members found it difficult to define exactly what it was that had brought them together. I began to feel a hitherto unimagined sympathy with Prince Charles who when asked whether he was in love with his new fiancé Diana Spencer famously replied, “Whatever ‘in love’ means.”

For love is the greatest mystery. That’s precisely why so many poems, songs and stories have been written about it. Science can’t explain it, not really. Love is phenomenal. So far my attempt at a romance wasn’t.

My salvation came in the form of an invitation from Branka Simunovich to visit her vast olive estate south of Auckland and witness the harvest. I watched the fruit being shaken from the trees, saw it being pressed, tasted a spoonful of pure liquid gold and listened to Branka talk with such passion about olive oil. And I decided at the heart of The Villa Girls was going to be a story about an olive estate.

There were other things that influenced me. For instance I realised I’d written four novels about food and Italy without ever dealing with the often tricky relationship many women have with eating or with the corruption that underpins much of Italian life, particularly in the south.

Then one day when I must have been feeling slightly exhausted, I had a grumpy moment about the way everyone has to be so goal-driven these days, always stretching for the next thing, never content. And I wondered what it would be like to write a story about someone who was entirely happy with life the way it is and not set on self-improvement.

And so The Villa Girls became a novel about a young English woman called Rosie, a successful food stylist who doesn’t want to change anything about her life. And a young man called Enzo who’s set to inherit a vast southern Italian olive estate and isn’t certain he wants any of the things that lie in store for him. This was a plot strong enough to carry the grittier of my themes although it did mean I developed a financially ruinous taste for the finest boutique olive oils.

It’s early days but so far it seems to be a book people like. One of my publishers described it as “emotive, beautifully paced, fulfilling’. My husband said it was a page-turner that brought a tear to his eye (and as we’ve already established he’s brutally honest).

And so I’ve written another book about friendship, family and food. But is it a romance?

Hmm more often than not things don’t turn out the way I plan them….

Nicky Pellegrino, a succcesful Auckland-based author of popular fiction, The Italian Wedding was published in May 2009 and Recipe for Life was published in April, 2010, is also the Books Editor of the Herald on Sunday where the above piece, and the two that follow, were first published on 27 March, 2011.
http://www.nickypellegrino.com/

Actress Michelle Ang stars in the lead role of Emily in the feature film release My Wedding and Other Secrets
The book I love most is........... A book of selected poems by e.e.cummings. My friend found it for me at a thrift store in Melbourne and it is by far one of the most special books I have ever been given. I am a massive fan of his contemporary style of poetry and some of the most evocative and compelling pieces of his are in there. My favourite being I Carry Your Heart.

The book I'm reading right now is..............Eating the Dinosaur by Chuck Klosterman. It’s a very interesting collection of essays where he questions and critically explores ideas about modern society and media. There is a chapter on the popularity of Abba and also a brilliant theory on audience intelligence and it’s connection with laugh tracks. Chuck has a very nimble brain and witty writing style. It’s really making me reassess the things I take for granted. Entertaining and educational.

The book I'd like to read next is..............All About Love: New Visions by Bell Hooks. It is actually a trilogy of books, all dealing with the elusive emotion of love. Hooks is a distinguished professor at NY City College, and she has written many works on sexism and racism. I’ve already read Where We Stand: Class Matters and really enjoyed it.

The book that changed me is...........The Power of Now by Eckhart Tolle. He offers simple yet enlightened ideas to finding inner peace and achieving greater fulfilment from life. I think reading this has helped me to try become the best person I can be, and to make peace with the fickleness of my career and life in this industry as well as learn how to be happy despite it all.

The book I wish I'd never read is.............
I think way back in my childhood I read a book about a race of reptilian aliens who came to inhabit Earth and adopted our physicality. That idea really embedded itself in my brain for a period and it gave me bad nightmares and a paranoia that was largely unwarranted. So for that fact, I guess you could say I wish I’d never read it!

Since it’s New Zealand Book Month I’m looking at crime-centred novels from three terrific local authors that are well worth a read:

It’s 1838 and part-Maori Wiki Coffin is scheduled to embark with the US Exploring Expedition from Virginia when he’s mistakenly arrested for murder before being tasked with surreptitiously investigating the expedition, on the high seas, to find the real killer. Druett marvellously combines mystery and history in a unique crime novel setting. Wiki is a terrific and engaging lead, the book is drenched in maritime colour and detail, and the murder mystery itself twists to a satisfying end.

A British secret agent is back in Thailand for the first time since he killed a top underworld boss’s son, ordered by his government to recover a small black box from the bottom of the ocean. But as his friends are beheaded one by one and he’s pursued by the CIA, he realises maybe he can’t trust his own handlers either, forcing him to go underground. Canterbury author Grant creates a terrific narrative drive, a nice sense of Southeast Asian setting, and memorable characters; a world-class spy thriller with layers and depth.

The Crime of Huey Dunstan
By James McNeish (Vintage, $36.99)

Blind psychologist Professor ‘Ches’ Chesney recounts a court case from years past where he was called in as an expert witness by the defence counsel of a young man accused of murder. There’s no doubt Huey battered an older man to death, but why? Did he really lose control, flashback to a suppressed, disturbing event from his childhood? Should he be guilty of manslaughter rather than murder, in the circumstances? McNeish takes readers on an intriguing ride, touching on thought-provoking issues of law and justice and humanity, as we discover what really happened to Huey.

Craig Sisterson was one of the judges of the inaugural Ngaio Marsh Award for Best Crime Novel last year. He blogs about crime and thriller fiction at http://kiwicrime.blogspot.com/
Posted by Beattie's Book Blog at 12:33 pm