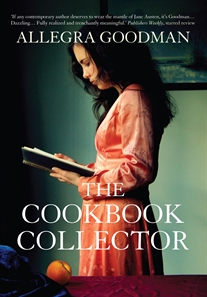 I was trying to think how to categorise this novel to give you some idea of what it is about. The first thing that I thought is ‘the intelligent woman’s romantic novel’ but that doesn’t really do justice to it. I had not read any of Allegra Goodman until I picked up this book. It is a reasonably big book (394 pages) in the large size paperback and set in Caslon typeface. It not only looks good, but it feels good and the cover that I have, is of a rather beautiful young woman reading a book and a lone peach just below the title. The peach becomes significant but that’s much further on.

In some ways this novel is two or even three distinct stories and I did sometimes wonder how it would all weave together. Naturally the title lures you in and it takes a while for that part of the story to unfold. The cookbook collector thread allows the author great licence to explore the sumptuous, romantic language of old cookbooks. She writes of ... ‘Adjectives sparing, nouns succulent and rich, bespeaking bacon, and crisp skin curling from roast fowl.’- I must say as a writer I envied that – and it’s not in the clichéd let’s throw food into the story sort of way. Of course food when written about well is sensuous but too it can be a cheap distraction. In this novel, the cookbooks are themselves a character and I suspect many readers will go back when they’ve finished reading this novel, to explore in depth and savour the lovely cookbook detours. I intend to.

Goodman sets up oppositional characters that possibly fall into stereotypes. There is always the risk when you set up these oppositions, that you remove empathy, that when you over describe and explain a character they become a type, not a person. Fortunately, the story is interesting enough to overcome this and my empathy for the characters grew rather than diminished.

The main thread is the story of two sisters, Emily and Jess. Emily is an innovator riding the crest of the NASDAQ wave and Jess is involved with a ‘Save the Trees’ campaign (in particular a mighty Redwood named Galadriel). Emily is the older sister and the CEO of Veritech Corporation an on-line data storage company which is about to launch public shares that will rapidly rise so that she becomes a paper billionaire. Whereas Jess is “antimaterialistic, she thought about money all the time. Independent-minded, she was insolvent.”

Jess works part-time in a bookshop with George who is “pushing forty...hard to please, and difficult to surprise.” He is a rare book collector who “dealt with ordinary books, of course, but only rarities excited him.” George is given the opportunity to purchase and take possession of a very rare cookbook collection. He employs Jess to help him catalogue the collection.

But there are many more characters and lot more plot threads than I can do justice to in a review – plus why spoil the story. Many of the periphery characters in this thread, are the smart-young upwardly mobile, 20 something programmers and entrepreneurs. It reminded me a little of the movie ‘The Social Network’ and the rapid rise of Facebook and all the politics within that. Except of course this is the heady late 90’s, and early 2000 when the NASDAQ is on the rise... and of course the subsequent free-fall. One of the characters, whose net worth is halved at one point, likens the experience to “Pooh’s tumble through the branches of the oak tree” in Winnie-the-Pooh.

What I did admire and at the same time it annoyed me, was the amount of detail Goodman weaves into the story to substantiate the provenance of the characters (and indeed the cook books too). But here’s a lovely example of I suppose ‘types’ ...’Programmers ridiculed the seminars, but they attended anyway in small groups, gathering in the glass-walled conference room to hear account managers from Goldman Sachs hold forth in suits of navy so dark the colour could not exist in nature, except possibly in the deepest ocean, where giant squid inked out their predators.”

The romance(s) within this novel manage to skirt cliché and there is often great tenderness and originality and you are sustained by wanting to know how things will work out for the characters, you really do care. As for the ending, well, it surprised me, and I didn’t expect another two themes deftly woven in, that may annoy others, but for some reason I found satisfying. Mostly I hate ending novels, or novel endings, but I was happy with this, felt good for the characters without feeling schmaltzy.

Do go to Allegra Goodman’s website and take a peek – it is quite gorgeous – she has this fabulous front page with a framed painting containing documents, bound letters etc, and you run your mouse over the documents and boxes open with text. Click on the photo of the author for starters. She is the author of six novels, hails from Massachusetts and was long-listed for the Orange Prize in 2009.

Footnote:
Maggie Rainey-Smith is a Wellington-based author, poet and bookseller who reviews regularly this blog.

http://www.acurioushalfhour.wordpress.com/
Posted by Beattie's Book Blog at 6:06 am