Vivid Years on the Arm of a Kennedy 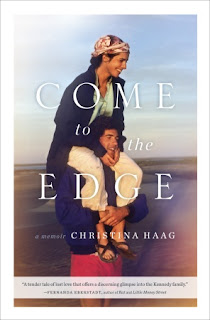 The tabloid press has already found its three hottest revelations from “Come to the Edge,” Christina Haag’s book about her five-year romance (1985-90) with John F. Kennedy Jr.
They are as follows: On a tropical vacation they found “Jamaican hospitality” was “impossible to refuse” on that ganja-happy island. He showed her a book about tantric sex. And they shared a dangerous kayak adventure.

So this is not a book full of tabloid appeal. But “Come to the Edge” employs a different kind of salesmanship. On her opening page alone Ms. Haag manages to mention fox hunting, the Essex Hunt Club; Jacqueline Kennedy Onassis’s home near Bernardsville, N.J.; and Meryl Streep, whose name is dropped only because she grew up nearby. Ms. Haag, who is also an actress, means to indicate that her years with Kennedy brought her the Camelot equivalent of an all-access backstage pass.

In this prologue the emphasis on Kennedy hospitality (Ms. Onassis favored “pressed linen sheets that smelled like rain”) is part of a tremulous episode that would not be out of place in the dewiest romance novel. Ms. Haag and her longtime friend John were preparing to appear in a play together in 1985. They went to his mother’s house to rehearse. While there John took Christina to a barn by moonlight. He gently showed her how to feed sugar to a horse.

Then he kissed her. “I opened my eyes for a second, not believing that what I’d dreamed of was happening,” she writes, and it only gets sudsier from there. “No. It’s right. Again. Don’t stop,” she tells herself — in italics. They brush their teeth together for an unusually long time so that they don’t have to part. Why does she smell mint? “In our passion, his toothbrush had become entangled in my hair.” He reluctantly escorts her to a guest room. They kiss once more. “The setting was virginal, but my thoughts were not,” she confides.

Throughout this book Ms. Haag works very hard to revisit her fresh young self and her glamorous, impetuous lover. But they are both long gone, so this takes effort. It makes her dig to find any conceivable Kennedy connections in her early life, to the point where she notes that she was born on May 4, 1960, “six days before Senator John Kennedy won the pivotal West Virginia primary.” And she mentions that in the Manhattan barbershop where she got childhood haircuts, there was a photo of the boy who would grow up to mean so much to her. He would, in 1988, be named People magazine’s Sexiest Man Alive because of, among other assets, his very nice hair.

Read the full review in The New York Times.
Posted by Beattie's Book Blog at 8:35 pm

Christina Haag spent five years in a romantic relationship with John F. Kennedy Jr. She recounts these years in her tender and honest memoir, Come to the Edge. While a memoir about loving one of the most famous Americans could be lurid and gossipy, this book is remarkable in its restraint. Haag tells a story that is relatable to many women; she loved a man, thought they were headed towards spending the rest of their lives together, but in the end, it didn't work out.