Sydney Herald Sun March 30, 2011
Blanche Clark, Cathy Osmond and Susan Bugg revisit some of the books that shaped their reading experiences and those of their children

THE GRUFFALO
BY JULIA DONALDSON;
ILLUSTRATIONS BY AXEL SCHEFFLER,
MACMILLAN

This is the tale of a clever mouse who outwits a very silly monster. Every book by Donaldson and Scheffler that's entered our house has been a hit. The verse is delightful to read aloud, and there's lots to see in the whimsical illustrations. C.O.

When I was a kid, the hound du jour was The Poky Little Puppy, a Little Golden Book that hasn't aged well. Thank god my kids have the scruffy black dog from Donaldson's Dairy, courtesy of Kiwi writer and illustrator Dodd. The rhyming verse is technically spot-on but playful too, just like Hairy and his mates. C.O.

I LOVE YOU, BLUE KANGAROO,
BY EMMA CHICHESTER CLARK,
HARPERCOLLINS

Lily loves Blue Kangaroo, but when she's given more toys, Blue Kangaroo finds himself relegated to the edge of the bed until one night he falls out. A gentle tale about the love-tussle between old and new. This was my youngest daughter's favourite bedtime story. B.C. 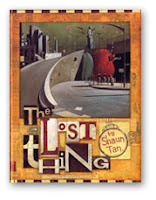 THE LOST THING
BY SHAUN TAN,
HACHETTE CHILDREN'S BOOKS
This tale of an odd metal contraption looking for a place to belong sucked me in as an adult, which didn't automatically mean my children would love it too. But love it they did. The detailed drawings are mesmerising. Tan won an Oscar for his animated short film based on this book. B.C.

MADELINE AND THE BAD HAT,
BY LUDWIG BEMELMANS,
SCHOLASTIC
Out of all the Madeline books we collected, this one sticks in my mind because it has some weighty themes buried in the rhyming couplets. Madeline meets the Spanish ambassador's son Pepito, who displays classic ADHD symptoms, terrorising people and animals alike. B.C.

MY MUM AND DAD MAKE ME LAUGH
BY NICK SHARRATT,
WALKER BOOKS

Mum loves spots and Dad loves stripes and their sensible grey-adorned son seems to be the odd one out -- until his obsession with elephants is revealed. Engaged by the bright colours and quirky characters, this was my youngest daughter's top "again, again, again" book. Her face still lights up when she sees it, even as a teenager. B.C.

NO ROSES FOR HARRY
BY GENE ZION, PICTURES BY MARGARET BLOY GRAHAM,
PUFFIN

First published in 1960, this is an old-fashioned, funny, feel-good story about Harry's thwarted attempts to lose the woollen jumper grandma has made. The retro illustrations are priceless and Zion always has a cheeky twist to his simple plots. B.C.

Everyone has their favourite Dr Seuss book -- this is mine. Loved the drawings, the wacky humour, and the sheer stupidity of it. My youngest daughter remembers Hop on Pop fondly, while the eldest liked Fox in Socks. B.C.

THE TALE OF PETER RABBIT
BY BEATRIX POTTER,
PENGUIN 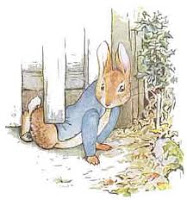 Published in 1902, children still identify with naughty Peter who disobeys his mother and steals food from Mr McGregor's garden, only to lose his jacket and shoes when he escapes. My daughter wanted the story again and again, poring over the cute illustrations and enjoying the thrill of Peter's escape. B.C.
For more, including books for older children go to the Herald Sun website.
Posted by Beattie's Book Blog at 9:26 am