By Nicholas Jones writing in the New Zealand Herald,Wednesday Mar 30, 2011 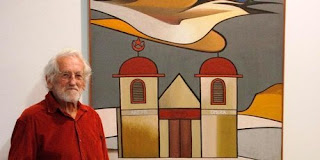 Kotare over the Ratana Church, Te Kao by Don Binney attracted bidders from New Zealand and overseas.
One of New Zealand artist Don Binney's most famous paintings was auctioned for $270,000 last night, with net proceeds going to the Christchurch earthquake relief fund.

Kotare over the Ratana Church, Te Kao has been owned by journalist and historian Dick Scott since 1964, but he decided it was time to part with it when he saw the devastation caused by February's earthquake.

"I've had 50-odd years enjoying it. But I thought, that's enough; I can be generous," Scott told the Herald yesterday.
"There's thousands of people with no houses now and all that kind of thing. I'm not normally terribly generous. But I thought it's about time I splashed out and made up for all my meanness."

The painting was possibly the most important of Binney's mid-1960s works still in private hands, and was an "icon painting" in the development of modernism in New Zealand art, she said.

Webb's had received much interest in the painting, and many people had taken the chance to view it, even if they were not going to bid.
"Because it's been extensively reproduced in all the Binney books and so extensively exhibited over its life, it's a work that lots of people are familiar with," Ms Coupland said.
"The opportunity to come and see it as it changes hands is something that people have taken."

A spokeswoman for Webb's said the auction was "extremely exciting" with a full room and bids coming from online and overseas bidders.
The painting was bought by an anonymous bidder who was applauded when he won the piece.

"You could tell he really wanted it. All I can say is that he's from New Zealand and so I think it will stay in the country," she said.

Scott bought the work for 50 guineas in the year it was painted, and gave dealer Rodney Kirk Smith copies of his recently published book on wine as part payment.

Binney later said in an interview that the purchase demonstrated the "collegial support" that existed when artists or writers would buy each other's work.
Between exhibitions, the painting has hung in Scott's Mt Eden home.

Scott said he was confident he wouldn't regret his decision to give it away, despite the painting being like a member of his family.
"I'm only a couple of years off 90. And so I've slowed down, I'm not worried.
"One of my sons is in Singapore, and a couple of my daughters are in Sydney. So different members of the family have buggered off. And I thought, well, there's a member that can go off as well."

Footnote:
The Bookman salutes you Dick, what an enormously warm and generous gift.
Posted by Beattie's Book Blog at 2:55 pm

Well done that man!
I've admired Dick Scott's work ever since I read the first edition of "Ask That Mountain" (a considerable time ago.) This magnificent gesture enhances his mana in my eyes even more-