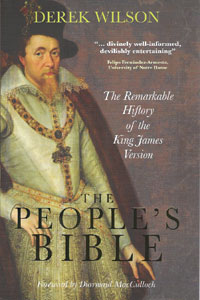 Books about the King James Authorised Version are rolling off the presses now to celebrate the 400th anniversary of one of the great books in the English language. A committee of English scholars – well, several committees really – toiled over the translation, using Hebrew and Greek bases , for about a decade before producing the tome which has not only influenced Christianity in English-speaking countries but had a resonant and lasting effect on the language itself.

I always used to joke that this translation of the Bible was the only work of art in history achieved by a committee, but after reading from William Tyndale’s translation of eighty years before, I revised my opinion.

Some scholars say up to eighty per cent of the Authorised Version came from Tyndale, who didn’t manage to quite complete the job before they caught him in Holland and garrotted him to prove that they were superior Christians.

I am not equipped by deep enough learning on the subject to make an estimate of that sort but what I can say is that Tyndale’s has the same unmistakeable, marvellous, sonorous tone of the later version.

Derek Wilson’s subtitle is ‘The Remarkable History of the King James Version’ but it is much more than that. It records with gusto but careful accuracy the history English translations since the Oxford scholar John Wycliffe first attempted the task in the 14th century.

For a few centuries the argument went on about whether the clergy should continue to use the Latin Vulgate Bible and keep the masses ignorant of the message of the founding book of Christianity so they would not misunderstand the message. This was an arrogance that many brave scholars fought to overcome. They were deemed heretics for doing so and often paid with their lives.

Wilson follows the fate of the Authorised Version from the beginning, relating how it was for a long time second best in the hearts of Englishmen to the Geneva Bible, translated by associates of Calvin in Switzerland. He goes on to write about the hundreds of other attempts to put the Bible into vernacular English. Some succeeded brilliantly for a time but never subsumed the great King James book.

To measure how much of an effect the translation had on English you have only to read the writing of Englishmen educated at the great universities, up to the middle of the 20th century anyway. And many self-educated people over the years based their style on the Bible. If you have a good ear for language you can hear the echoes in so much writing for centuries.

Anyone familiar with the Authorised Version will hear it powerfully come through when they read the writings, and particularly the speeches, of Abraham Lincoln, perhaps the greatest ever writer among politicians.

This is a briskly written survey of the whole history of translating the Bible into English. In one paragraph he sums up why it was the language of the 15th and 16th centuries achieved what it did: ‘The Authorised Bible and Shakespeare’s plays are often regarded as the twin pillars of English “golden age” literature. In fact the place of the two corpuses in the development of language could scarcely be more different. Written English was a relatively new phenomenon. It was like a butterfly emerging from the chrysalis or a flower from the bud – full of exciting promise. Writers could be inventive, could do new things with it. Shakespears is, of course, the supreme example; he added hundreds of words to the language.[The translating scholars] neither enjoyed nor wished to enjoy this heady freedom. Their use of the vernacular, though rich, drew upon the established vocabulary of printed books and they were also influenced by the syntax of the Hebrew and Greek originals. If the produced, as they certainly did, an end product that was mellifluous and well balanced it was because they were concerned with how their Bible would sound in worship rather than what literary merit it might possess.’

Footnote:
Gordon McLauchlan is an Auckland-based writer & commentator & an occasional reviewer on this blog.
Posted by Beattie's Book Blog at 6:03 am