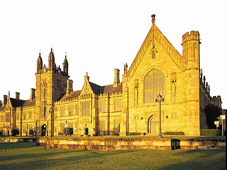 Established in 1850 the University of Sydney last night hosted a cocktail reception and panel discussion in the beautiful gothic Great Hall attended by some 200 guests, one of whom was The Bookman.

I was reminded of the Guildhall in London when I attended the Man Booker Prize event the year Lloyd Jones was shortlisted for Mister Pip. The Great hall is smaller of course but lots of impressive stained glass and rather than the sculptures of notable politicians there were portraits of Chancellors and Vice-Chancellors of the University.

We were welcomed by the Vice Chancellor of the University Dr.Michael Spence who started by acknowledging the custodial nature of the land on which the Great Hall stood and then talked briefly and approriately about excellence and the valuing of excellence, and about the university's delight in being involved in the Man Booker Inetrnational Prize.

Then followed an hour long discussion between the three judges of the Man Booker Intetrnational Prize - Rick Gekoski, Carmen Callil,Justin Cartwright - and Fiammetta Rocco, Administrator of the Prize (and longtime literary editor at The Economist).

Following an outline and history of the Man Booker Prizes the panel then had a robust discussion on selection process, (16 months of monthly meetings, endless telephone calls and e-mail exchanges between the three judges), criteria, translation and associated problems,the need for more and better translations, categories and genre, role of literature in the world today and a raft of other relevant subjects.

Having attended many many panel discussions over the years I well know that some panels work and some panels don't, this one though really worked and those present went away satisfied following an interesting and stimulating  evening. I was especially impressed with Justin Cartwright's contribution, he was wonderfully entertaining, always thoughtful, and a he has a keen sense of humour.

I was also taken by remarks from Rick Gekoski on the subject of  "world books". He said that only 3% of fiction published in the UK was "in translation" which means he suggested that there is an awful lot of good writing out there that we never get to read. We need he suggested "more exposure to world fiction". I agree with him.

I noticed authors Lloyd Jones and David Malouf, (pic left - Penny Stephens), among the audience and managed a brief chat with them both after the event. David is thrilled to have been included in the Man Booker International Prize shortlist.

Today I fly home to Auckland after a most stimulating two days in Sydney. Now we await to learn which of the 13 shortlisted finalists is the winner of the Man Booker International Prize for 2011, to be announce at the Sydney Writers Festival on 18 May. I wonder if I could slip back for that?

Footnote:
Nice to see my favourite Sydney bookseller, Gleebooks, with a display of books by the shortlisted authors for sale at the event. Considering they didn't know who the shortlisted authors were until a few hours before the event they managed to mount a most impressive display. David Malouf, of course, and Philip Roth were especially well represented.  gleebooks.com.au
Posted by Beattie's Book Blog at 9:50 am