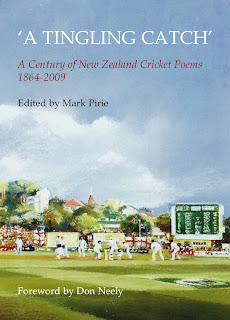 Editor, publisher and poet Mark Pirie, was interviewed for the show at the NZ Cricket Museum, Basin Reserve, along with cricket historian Don Neely (who wrote the foreword) and Radio NZ National's Jack Perkins reading poem excerpts from the book and talking about the poems they read.It's a short segment so not all of the material recorded will be used.

The show will be shown several times and is replayed on Sky sports channels. Go to http://www.skysport.co.nz/
and check the Sky TV guide for more details."
Posted by Beattie's Book Blog at 3:15 pm