Elizabeth Caffin to retire in February

After 20 years as Publishing Director at Auckland University Press Elizabeth Caffin is to retire in February next year.
She should take huge pleasure and satisfaction when she looks back on AUP's publishing under her guidance.
AUP have dominated the Montana NZ Book Awards for poetry throughout this time and have also scored handsomely in other categories particularly biography and history.
Well done Elizabeth.
I have no doubt there will be many aspirants lining up for her position which the University are currently advertising.
Posted by Beattie's Book Blog at 4:54 pm No comments:

Email ThisBlogThis!Share to TwitterShare to FacebookShare to Pinterest
Digital Publishing

Pan MacMillan, Faber and Dorling Kindersley are among a host of UK trade publishers planning to make an aggressive entry into the e-book market next year, as industry eyes 2008 as the digital tipping point.

I was saddened to read in Booksellers News of John's death at age 45. He was a former editor of Australian Bookseller and Publisher, director of the Sydney Writers Festival and was working at the time of his death,(by heart attack), in the Department of Premier and Cabinet in Melbourne.

John came from a distinguished literary family.His father, also John, is a renowned translator and author, and his mother, Agnes, was the long time Manager of the Centre for Youth Literature in Melbourne until her retirement last November. She was, in my view,Australia's most passionate advocate of reading for young people and no one I have met did more for literature and literacy.
She also did much to promote NZ children's books in Australia.

I extend my deepest sympathy to John's widow and three young sons, and to his Mum and Dad.A memorial service for John is being held at Melbourne University today,(31 October 2006).
Posted by Beattie's Book Blog at 8:48 am No comments:

I say look at it rather than read it because there are no words.Rather it is 128 pages of haunting and evocative, monotone-tint illustrations, (reminiscent of Grandma's photographs), making up a remarkable if somewhat threatening series of connecting images.

But be warned this is not a book you can just glance at and understand. "Reading" it is a difficult and demanding exercise and the further you get into it the more puzzling and surreal it becomes.

Essentially it is the story of a migrant with only a battered suitcase and a handful of cash finding his way in a strange new city.At first one thinks our nameless protagonist has arrived at Ellis Island in New York, and there are clearly influences of that place, but no, it soon becomes apparent that we are not in New York or for that matter anywhere else that can be reconised.It is a strange and bewildering country for our new arrival, and I must say for the reader/viewer.

I looked and digested this book with three adult friends and collectively we decided that the book is about the confusion that frequently accompanies migration as migrants struggle to cope without language, and often without family as in this case, in a foreign land.

Shaun Tan was born and resides in Perth, Western Australia and has received much favourable comment for the five earlier titles he has illustrated particularly 'The Rabbits" which was created with text from noted writer for young adults, John Marsden.

This new title, superbly designed to make it look something like an old and much loved family photograph album, will undoubtedly create a lot of comment and discussion but I doubt whether it will become a best-seller as so few of us are certain how to handle books without text. A shame because the artwork took Tan four years to complete.

The comment on the back-cover is that "this silent graphic novel is the story of every migrant, every refugee, every displaced person, and a tribute to all of those who have made the journey." Maybe, have a look at it and decide for yourself.

It is worth having a look at Shaun Tan's most attractive website if you would like to know more about him and his books- www.shauntan.net


Talking of children's books I note that "Eats,Shoots & Leaves" by Lynne Truss has been adapted for young children so if you feel your kids are not being taught grammar adequately at school, as one hears so often from parents, then this might help!

Email ThisBlogThis!Share to TwitterShare to FacebookShare to Pinterest
Taking Tea in the Medina by Julie Le Clerc Penguin Books

When did I last hold a book that was as beautiful an object as this? Probably the last collaboration of Julie Le Clerc and photographer John Bougen, Made in Morocco-A Journey of Exotic Tastes and Places which was published in 1994.

This new title is even more sumptuous and I must give accolades to the publishers for the high production values they have brought to this book. They have, of course, been given a huge headstart by the stunning photographs supplied by Auckland photographer John Bougen and by the author.

Julie Le Clerc is one of New Zealand's foremost food writers, this is her 11th title, she also holds down the somewhat iconic role of food editor for the NZ Woman's Weekly, and she is in demand as a food stylist, guest chef, and cooking demonstrator.

I am a big fan of hers because every recipe I have made from one of her books has worked for me. The recipes are always well-laid out, easy to follow with clear instructions that even someone like me who has come to cooking late without any training can follow and execute.

But this new book is a treasure and a must-have even if you don't ever make one of the hundreds of mouth-watering recipes. All the diversity and flavours and aromas of the Middle East rise up from the page to greet you. She takes us to Lebabon, Turkey, Jordan, Azerbaijan, and Egypt and along the way we meet whirling dervishes, visit caviar markets, tea houses, souks, we sail the Nile, and of course everywhere we share with her the most divine food.

This is a bit of a rave but for me it is that most winning of combinations, a meticulously researched, entertainingly written travel book combined with delicious recipes and the most gorgeous photographs.

I predict this is a book that will enjoy international success and will win awards and accolades for the author, photographer and publisher.
Posted by Beattie's Book Blog at 9:45 am 1 comment: 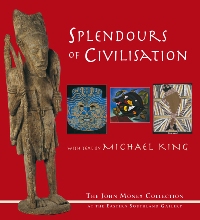 Over the recent holiday weekend we visited the Eastern Southland Gallery in Gore in order to view The John Money Collection which is housed there.
What an extraordinary and eclectic collection of art - from New Zealand artists Rita Angus and Theo Schoon to Aboriginal artists and contemporary American artists along with an astonishing array of African initiation masks and statues.

John Money, who died earlier this year, was an internationally renowned and somewhat controversial sexologist who was based at John Hopkins University in Baltimore for more than 50 years.Although New Zealand born and educated, he had two masters degrees by the time he was 23 years old, Money moved to a position in the U.S. while in his late 20's and lived there for the rest of his life.

In this most attractive publication we learn from curator Jim Geddes how The John Money Collection from Baltimore,Maryland ended up in a remote corner of New Zealand and the doyen of New Zealand biographers, Michael King,(who came to know Money will researching his biography on Janet Frame) ,provides a highly readable, stylish and entertaining biographical essay.
The book is generously illustrated with colour plates featuring art from The Collection along with black and white photos of John Money and friends
Posted by Beattie's Book Blog at 9:12 am No comments:

I am full of admiration for the skill of this master writer, a veritable craftman with his use of the English language - a writer whom New Zealand journalist Steve Braunias recently described in the Sunday Star Times as perhaps "the cleverest writer alive with his dazzling, spectacular prose, his knockout lines and his brilliant thinking".

Having said that though I have to say that this is the bleakest and most joyless book I have read in many a year, perhaps ever.

He gives us the squalor and ghastliness of the , The Gulag Archipelago, so astonishingly and powerfully described back in the 70's by Alexander Solzenitsyn following his 8 years in Soviet prison camps and for which he was subsequently exiled.

Amis' novel is told in the form of a letter written by an un-named elderly Russian to his American half-daughter. Near the end of his life he is paying a visit to the prison camp in the Russian arctic (why would you?) where he spent 10 years until 1956 as a political prisoner in the most apalling conditions imagineable.

The letter, the novel, moves backwards and forwards between this ghastly gulag setting, his complex relationship with his half-brother Lev, and his refelctions on modern day Russia.
The deprivations of camp life seem beyond human endurance.
The prisoners put up with freezing cold, starvation, disease, gang wars and the most obscene and unimagineable inhmanities inflicted buy other prisoners.

Underlying all this is the story of the two half-brothers having fallen in love with the same 19 year old Jewish woman in Moscow before they were imprisoned and so there is this sort of tragic, hopeless love story running through the novel as well.
The un-named protagonist, (we never learn his name) , is a particularly unappealing character (massive understatement), he has been a rapist during World War 2, he bullies and maimes and eventually kills while in prison. On the other hand his half-brother Lev is a thoroughly decent, gentle and humane character, a pacifist even. He is also physically ugly. He has a very tough time in prison. He arrives later than his brother by which time the half brother is an old hand.

I suppose the novel is moving in parts, there is some well done dark comedy; Amis is undoubtedly a brilliant writer but truly for my part I could not honestly recommend a book so wearingly bleak as this one. The protagonist has to rate as one of the least appealing fictional characters I have ever come across.
Posted by Beattie's Book Blog at 6:35 pm 1 comment: