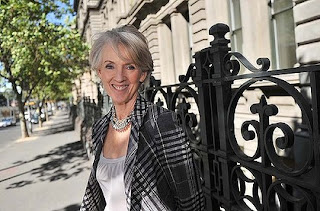 JOANNA Trollope's latest novel tackles the fraught relationship between a mother and the wives of her three sons. So one of the first questions for the British novelist is, does she mind people telling her mother-in-law jokes?

She's perhaps slightly surprised. ''They get halfway though them but I don't think I wear a very helpful expression,'' she says.
''It can be a fantastic relationship. It's not a pantomime joke about women, and [those jokes] are pretty rude about men.

Story today in Sydney Morning Herald.
Posted by Beattie's Book Blog at 11:47 am