Alice at the NLS

A rare first issue of the first edition of the children's classic Alice's Adventures in Wonderland, and original costume visuals from a new Scottish Ballet production of the famous tale, will feature in a new display at the National Library of Scotland. 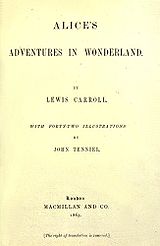 The 'Alice in Wonderland treasures display' launched on 18th March and featured a host of items relating to the 1865 book and its author Charles Lutwidge Dodgson who penned it under the pseudonym 'Lewis Carroll'.

Key exhibits include a rare copy of the withdrawn 1865 first issue; the author hastily withdrew the first print run of 2,000 copies following complaints about the quality of the printed illustrations from their creator John Tenniel. Few copies have survived, and the Library's copy is in the original red cloth binding.

Stephanie Breen, senior curator, National Library of Scotland, said: "The 'Alice in Wonderland treasures display' is a unique opportunity for enthusiasts to get up close to a very rare issue of the book and other treasures which are seldom seen.

"Visitors will have a wonderful opportunity to view the first and second editions side by side and examine the differences in printing between the withdrawn 1865 Alice, printed at the Clarendon Press, and the subsequent 1866 edition, printed by Richard Clay as a replacement."

Other highlights in the treasures display include a first edition of Through the Looking-Glass, and What Alice Found There (1872) signed by Alice Pleasance Hargreaves (née Liddell) - the original inspiration for 'Alice' - and various letters from Dodgson (Carroll).


The World of Letitia Elizabeth Landon: A Literary Celebrity of the 1830s

The exhibition “The World of Letitia Elizabeth Landon: A Literary Celebrity of the 1830s” opens at the Grolier Club in its second floor members' gallery, 47 East 60th Street, New York, on March 24, 2011 and runs through May 27. On view will be manuscripts, first editions, prints, photos, and other materials to illuminate the life and art of a leading British writer of the late Georgian and early Victorian period.

While relatively unknown today, Letitia Landon was an international celebrity, whose works circulated throughout the British Isles, on the Continent, and in the United States. Writings by her were translated into French, German, and Dutch, and distributed from Paris to St. Petersburg. Her work was known by Poe, Whittier, Hawthorne, and many other prominent American authors. Renewed recognition of Landon’s impressive achievement is long overdue.

Landon was born in London in 1802, and began publishing poetry at the age of 17 in an influential London periodical, the Literary Gazette. In 1824 her volume of romantic narrative poems, The Improvisatrice, became a major best-seller. She also wrote reviews, articles, and stories for London journals, and contributed to popular literary annuals such as Forget Me Not, and The Keepsake. In 1831 Landon published her three-decker novel Romance and Reality, followed by successful historical novels, Francesca Carrara (1834), and Ethel Churchill (1837). In June 1838 Landon married George Maclean, a colonial official, and sailed with him to Cape Coast, West Africa (in present-day Ghana), where she died suddenly at the age of 36.

Landon’s work remained in print into the 1890s, and in the 20th century she was remembered in a number of biographical studies. Her voluminous publications are now again in print, and she has attracted attention for her success as a young single woman carving out an independent career in the tough arena of literary London in the 1830s.

Landon’s writing today exerts a powerful fascination in the vividness and musicality of her distinctive voice. Her typical themes are “Sorrow, Beauty, Love and Death.” As suggested in the title of her best-known novel, she writes movingly of “romance,” and incisively of “reality.”