And so to bed again with Lady Chatterley 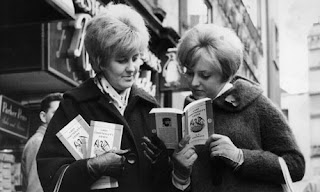 Two women in 1960 with copies of Lady Chatterley's Lover after a jury at the Old Bailey decided that it was not obscene. Photograph: Keystone/Getty Images

Ever since World Book Day, there has been a lot of loose talk about "the joy of reading". Fair enough, but every reader knows that this "joy" is complex. You can be bored, enraged or frustrated by a book like almost nothing else.

There are compensations. For instance, there's always the guilty pleasure of rereading old favourites. With ageing, this increases. I've been conducting a straw poll of more senior book lovers, asking what they are reading now. "I don't read," said one. "But I reread, all the time. A good book gets better with age."

With this encouragement, since the new year I've pursued a modest programme of rereading: Brighton Rock, Persuasion, The Great Gatsby, The Golden Gate, and Waiting for the Barbarians. It's true. Good books do get better with the passage of time. You find more and different things in them, mixed with bittersweet memories of your first reading. Reading groups are always worrying about which new book to discuss. Why not admit that enough is enough and devote more time to what we already have on the shelves?

There is, however, one problem. Inevitably, there are some writers and books to which it is difficult, if not impossible, to return. D H Lawrence is a notorious case. Like many adolescents, when I was 17, I devoured everything: The Rainbow, Sons and Lovers, Women in Love, the poems and short stories, Kangaroo and, of course, Lady Chatterley's Lover, so recently liberated by a landmark trial. For the teenage reader, Lawrence, the poet and novelist, is the supreme literary artist: vivid, intuitive, sensual and transgressive. But now what? Today, he seems chippy, callow, misogynistic, flashy and irritating, the worst kind of literary windbag. There was no way I could include D H Lawrence, still less Lady Chatterley's Lover, in my rereading programme.

Actually, I did. One should never confuse the improbable with the impossible. On a long drive to Wales, I listened to it as a classic of the spoken word. Naxos, which specialises in exceptional recordings of the English canon, has just issued it as an audiobook, beautifully read by Maxine Peake of Dinnerladies and Shameless.

The audio version of perhaps the most controversial novel of the 20th century is a revelation. I'm not sure that it's a better book on reacquaintance, but it's unquestionably different. The Naxos brochure boldly declares that "Lady Chatterley's Lover is all about sex". But that's wrong. What you discover on a second reading is that it's all about class. And after that, it's all about the wasteland of the years after the Great War. Lawrence, the inveterate finger-wagger, is unequivocal about that. "Ours is essentially a tragic age," he begins. "The catastrophe has happened, we are among the ruins."

And off we go. But here's what I'd forgotten. For nearly 100 pages, Lawrence gives the reader a portrait of a dead marriage between a mismatched couple adrift in "the void" of interwar Britain. It's not until chapter seven that Connie goes up to her bedroom and does "what she had not done for a long time: took off all her clothes, and looked at herself naked in the huge mirror". Several more pages pass before Connie finally submits to the gamekeeper's embrace and we plunge into those hilariously breathless passages our grandparents thought were pornographic.

Meanwhile, everyday life at Wragby Hall and the desiccated literary career of Sir Clifford Chatterley rattle along like subplots torn from the pages of a latterday Mrs Gaskell. Connie is certainly having some sexual epiphanies in the gamekeeper's hut, but she's a metropolitan snob, despite her passion. To Connie, her lover "seemed so unlike a gamekeeper, so unlike a working man anyhow; although he had something in common with the local people". Lawrence emphasises this point by the use of dialect, a theme that emerges more explicitly from Maxine Peake's exemplary reading.

In between the cockeyed social commentary and the phallocentric meeting of Connie and Mellors, there is, as always with Lawrence, some lovely landscape writing. No one does spring better than Lawrence, words that remain timeless and true, especially today: "The bluebells were coming in the wood, and the leaf-buds on the hazels were opening like the splatter of green rain."
Posted by Beattie's Book Blog at 10:18 am

To go back to Gatsby: it occurred to me recently that the last page, regretful, grief-stricken look at the receding green of The New World, takes on new poignancy with our current economic collapse.