Further to our news brief about Sarah Crichton leaving FSG at the end of the year to pursue other opportunities, when we queried the publisher about it last week they said there was no announcement. Now they have issued a statement, in which FSG publisher and president Jonathan Galassi says, "With her unique blend of enthusiasm, discernment and publishing talent, Sarah has been a beloved and energizing presence at FSG. She will be missed."

Crichton adds, "My almost-fifteen year run at FSG has been a joy. I am leaving with great fondness for my colleagues, my wonderful authors and their splendid books. This has been one of the most exciting and rewarding chapters in my life. I look forward to discovering what the next chapter holds." The imprint itself will continue to publish books though December 2019.

Elsewhere,Juan Milà Valcárcel has joined the Harper One group as executive editor, based in New York and reporting to Judith Curr, responsible for building the fiction list as the group "expands beyond its eponymous imprint. He was at Salamandra in Spain for the past 13 years. Valcárcel will be hire a senior editor, and he will also acquire Spanish-language titles, in coordination with the team at Harper Iberica, and others.

Ashley Towne will move up to director of the Journals division at the University of Chicago Press as of June 1. Most recently, she was interim director and publishing operations manager in that division.

London Book & Screen Week has announced a US version of their Creativity Across Media: Entertainment and Originality Awards, opening for entries in September 2018. They will give awards for book to film; book to game; book to stage; book to TV; and book to audio.
Posted by Beattie's Book Blog at 10:25 am No comments: 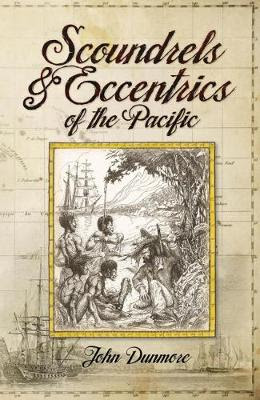 Scoundrels & Eccentrics of the Pacific

Come and hear author John Dunmore, author of Scoundrels & Eccentrics of the Pacific,  in conversation with Lydia Wevers.

In-store at Unity Books Wellington
Thursday 14th June, 12-12:45pm
Scoundrels & Eccentrics of the Pacific is a collection of tales of the men, and in some cases the women, who sought to benefit from the discoveries of the early explorers.
They were mostly scoundrels and rogues with little conscience but great craftiness, and they left in their wake others who found themselves victims of unimaginable situations.
Here are the adventurers who once made the great Pacific their playground — from likeable dreamers to outright con-men, slavers and pirates, and even one self-titled Queen Emma.
There’s the extraordinary tale of James Proctor who used his wooden leg to trick natives into coming aboard his ship so he could spirit them away as slaves; or the French priest Fr Rougier who used his position to amass a fortune, eventually becoming the ‘King of Christmas Island’.
Along with rollicking tales of the outrageous and bizarre, there are gloomy accounts of those fallen prey to human trafficking, goldfield fever and unscrupulous traders.
It shows that mankind, in whatever period and whatever part of the world, may have its heroes, but always has its villains
Posted by Beattie's Book Blog at 9:30 am No comments:

Posted by Beattie's Book Blog at 9:16 am No comments:

Authors Defend W.H. Smith: British authors have waded in to defend the retailer after it was named the worst shop on the U.K. High Street this weekend.


Lit Agency Embezzled for $3.4 Million: A Manhattan accountant cooked the books at Donadio & Olson, leaving the company on the brink of bankruptcy.


A Book Wrapped in Intrigue: The co-author of the book 'The Spy Chronicles,' a former Pakistani intelligence chief, is facing an inquiry over the book from his Indian counterpart.


Adichie Comes to Terms With Global Fame: As Chimamanda Ngozi Adichie's subjects have expanded, her audience has, too—but visibility has its drawbacks.


Posted by Beattie's Book Blog at 9:12 am No comments: