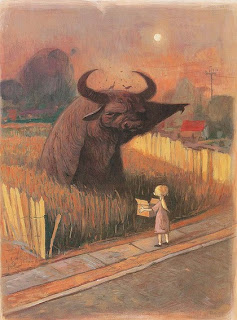 
AFTER the hoo-hah of winning an Oscar last month, Shaun Tan thought he was bound for a quieter life. That was until he received a call from Sweden on Tuesday night telling him he had won the world's richest award for children's and young-adult literature, the Astrid Lindgren Memorial Prize, worth 5 million krona ($765,000).

''I was washing the dishes when my phone went,'' he says. ''I couldn't recognise the number and I was going to ignore it … The voice at the other end mentioned Astrid Lindgren and I thought they probably wanted more information about me because I knew I had been nominated for it and they always want lots of details. But then in a formal way the voice said they had chosen me as recipient of the prize and asked, 'How do you feel?' and I was still doing the dishes.''

Tan's call came only a couple of hours before the official announcement. But when he heard applause he was alarmed to realise that from his kitchen sink he was on speaker phone to the awards committee.

Its citation described Tan as ''a masterly visual storyteller, pointing the way ahead to new possibilities for picture books. His pictorial worlds constitute a separate universe where nothing is self-evident and anything is possible … He combines brilliant, magical narrative skill with deep humanism.''

Full piece at Sydney Morning Herald.
Posted by Beattie's Book Blog at 11:56 am