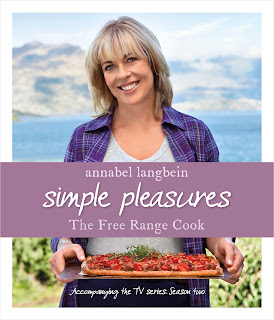 I love everything about this new book from Annabel Langbein, NZ's biggest selling cookery writer by a country mile, (Annabel Langbein The Free Range Cook has sold about 165,000 copies in NZ alone, and Annabel's previous book The Best of Annabel Langbein: Great Food for Busy Lives (aka to me and many others as 'The Bible') has also sold more than 150,000 copies in NZ).
The design, the photography, the recipes, the friendly text, no doubt it is another winner especially with the TV series of the same name about to kick off.  SCREENING ON TV ONE AT 7PM ON Saturday NIGHTS FROM 22 SEPTEMBER.

Look at these gorgeous endpapers! 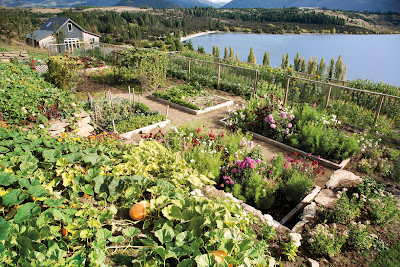 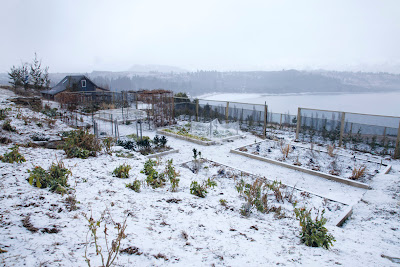 Following the phenomenal local and international success of her TV series and cookbook Annabel Langbein The Free Range Cook, Annabel returns to her idyllic lakeside cabin in Wanaka (photos above) to cook up an exciting new batch of recipes.
True to her philosophy that quality natural ingredients need little in the way of fussy preparation, her new TV series and book are entitled Annabel Langbein The Free Range Cook: Simple Pleasures.
In each half-hour TV episode she ventures out by jetboat, helicopter or in her trusty yellow truck to meet local producers, gathering artisanal ingredients to combine with seasonal harvests from her own garden in simple but delicious meals to be shared with family and friends.
With her fresh, free-spirited approach, effortlessly achievable recipes and clever cooking tips, Annabel shows how easy it is to bring good food and good times into today’s fast-paced world.
As well as more than 200 delicious recipes, all easily achievable by the home cook, the accompanying book features menu suggestions drawn from the TV series, plus Annabel’s musings on living well in today’s fast-paced world.
It is interactive with Annabel’s website annabel-langbein.com, with QR codes on many recipes linking the reader directly to a video of Annabel making that recipe or sharing her tips for simplifying tricky techniques (please note these won’t be active until the launch of the TV series later in September).
“In the rush and bustle of daily life it’s easy to feel overwhelmed, as though there’s never enough time to stop and just be,” says Annabel. “Growing, preparing and enjoying food together quickly gives us a sense of belonging.”
With this inspiring new TV series and book, viewers and readers are invited to take time out from their busy schedules to savour life’s simple pleasures.
The Free Range Cook: Simple Pleasures
The TV Series: 13 half-hour episodes in prime-time on TV One, starting  September 22, 2012 .

About Annabel Langbein
Annabel Langbein is New Zealand’s leading celebrity cook, food writer and publisher, and the star of her own international television series, Annabel Langbein The Free Range Cook.
With 19 cookbooks under her belt, Annabel has earned a passionate following for her uncomplicated recipes that transform inexpensive, everyday ingredients into meals with the wow factor. She draws on a global palette of flavours and her trademark Fridge Fixings to create dishes that are big on flavour while, with a few indulgent exceptions, light on fat and sugar.
Annabel’s books have won numerous international awards, been translated into multiple languages and sold close to two million copies throughout Europe, North America and Australasia.
The first season of her TV series was produced in association with TVNZ and distributed by leading production company Fremantle Media and sold into 83 territories around the world. A second season will have its international debut in primetime on TVNZ’s TV One in Spring 2012, and the accompanying book of the same name will be published concurrently in New Zealand and Australia.
The book that accompanied the first season, Annabel Langbein The Free Range Cook, became a publishing phenomenon when it sold close to 150,000 copies in New Zealand alone in the eight months following its release in September 2010. It has since been published in Australia (with HarperCollins), the UK (with Octopus), France (with Larousse) and the Netherlands (with Unieboek). German and Polish editions are due for release later in 2012. The book was named Best TV Cookbook in the Gourmet World Cookbook Awards for 2012.
Annabel grows much of her family’s fresh produce in extensive organic vegetable gardens at her Auckland home and the rustic cabin on the shores of scenic Lake Wanaka where Annabel Langbein The Free Range Cook is filmed. She is a member of the Sustainability Council of New Zealand and a passionate advocate for using seasonal ingredients as a means to cooking and eating well.
For more information see:
http://www.annabel-langbein.com           http://twitter.com/annabellangbein
http://blog.annabel-langbein.com           http://pinterest.com/annabellangbein
http://www.facebook.com/annabel.langbein
___________________________________________________________ 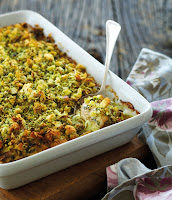 And here is a recipe from the book for you to try,(I can vouch it is delicious):

It’s easy to get stuck in a rut cooking the same old things, but one of the easiest ways to get out of that rut is to revitalise old favourites. Here I’ve given a classic leek and chicken bake a fabulous update by marinating the chicken in cayenne, mustard and worcestershire sauce. It’s such a useful dish to make in advance and keep in the fridge until you’re ready to pop it in the oven.

Heat butter in a heavy pan, add leeks and season with salt and pepper. Cook over low heat, stirring now and then, until softened and no longer bright green (about 15 minutes).
While the leeks are cooking, place chicken in a bowl with mustard, worcestershire sauce, cayenne, thyme and salt and stir to combine. Allow to sit for 10 minutes while the leeks cook.
Remove cooked leeks from heat and mix in cream or chicken stock. Spread evenly in the base of a large, shallow baking dish. Arrange chicken thighs on top then cover with Provençal Crust. The gratin can be prepared in advance to this stage and chilled for several hours until needed.
When ready to cook, preheat oven to 180°C. Bake until chicken
is fully cooked through and crumbs are golden (about 1 hour).

Provençal Crust
I often double this recipe so I can keep some in the freezer. It makes a great topping for a gratin, cauliflower cheese or braised vegetables and can also be used as a crust for lamb or a topping for baked mushrooms.

Break bread into rough chunks, removing crusts if they are
very hard, and pulse in a food processor until coarse crumbs form. Measure out 2 heaped cups and freeze any remaining crumbs for future use.
Place garlic, parsley, rosemary, anchovies, butter and lemon zest in a food processor and whizz to chop finely. Add breadcrumbs and parmesan and pulse to just combine. Provençal Crust will keep in a container in the fridge for up to a week or can be frozen.
Posted by Beattie's Book Blog at 12:26 pm

Making the chicken and leek gratin for dinner tonight. Will let you know if its a hit with the eaters in two hours time.

I've made this a few times and it is delicious!!! Nice with a salad in summer, or roast veges in winter :)

Loved it!!It was a big hit. Thanks Annabel

can anyone suggest a Summer vegetable replacement for the leeks.