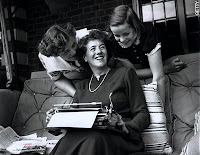 C banned Enid Blyton for nearly 30 years because the corporation considered her work to be ‘second-rate’. Some archived documents which have been made public for the first time explain how the creator of The Famous Five and Noddy had her work dismissed.

In 1938, the head of the BBC Schools department, Jean Sutcliffe, wrote that she felt that the stories might do for Children’s Hour but that they did not have enough literary value for her department.
Blyton’s work was eventually heard on radio – on Woman’s Hour in 1963 – five years after her death.

Above item from Ibookcollector © , published by Rivendale Press Ltd.
Posted by Beattie's Book Blog at 3:47 pm

My book on Enid Blyton titled, The Famous Five: A Personal Anecdotage (www.bbotw.com) still demonstrates a profound affection for many of her books.

Women are often dismissed as light-weight, despite overwhelming popularity and a preponderance of evidence to the contrary--Agatha Christie and J.K.Rowling come immediately to mind, two of the most popular writers in the English language.

I distinctly recall listening to a BBC radio serial of The Mystery of the Burnt Cottage in January 1961, which makes me question the claim in this article. This was on 4YA in the Children's Half Hour, a recollection which could be confirmed or proved false by consulting the NZ Listener archives.