By Charles Mc Grath in The New York Times,  March 29, 2011
SOUTHPORT, Conn. — Long thought to have been burned the way the North set fire to the cotton at Tara, the final typescript of the last four chapters of Margaret Mitchell’s “Gone With the Wind” has turned up in the Pequot Library in this Yankee seaport town. If not quite a spoil of war, the manuscript is a relic of some publishing skirmishes, and it will go on exhibit starting on Saturday, before traveling to Atlanta, Mitchell’s hometown, in time for the 75th anniversary of the novel’s publication in June. 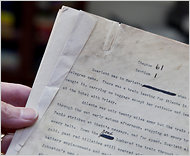 Left - A page from the final draft of a late chapter of “Gone With the Wind.”

The chapters, which contain some of the novel’s most memorable lines — like, “My dear, I don’t give a damn” and “After all, tomorrow is another day” — were given to the Pequot in the early 1950s by George Brett Jr., the president of Macmillan, Mitchell’s publisher, and a longtime benefactor of the library. Some pages from the manuscript were actually displayed at the Pequot twice before — in a 1979 exhibition of Macmillan first editions, also donated by Mr. Brett, and in 1991 for a show honoring “Scarlett,” Alexandra Ripley’s authorized, if not very good, sequel to “Gone With the Wind.”
But Dan Snydacker, executive director of the library, said nobody back then paid the manuscript much attention or recognized its importance.
The pages went back into storage and resurfaced only in response to a query from Ellen F. Brown, who was working with her co-author, John Wiley Jr., on “Margaret Mitchell’s ‘Gone With the Wind’: A Bestseller’s Odyssey From Atlanta to Hollywood,” published in February by Taylor Trade Publishing. Ms. Brown was interested in the Brett collection at the Pequot and curious to know if any of the library’s many foreign editions of “Gone With the Wind,” yet another bequest, had inscriptions from the author to her publisher.