BE THE FIRST IN NZ TO SEE THIS TIE-IN COVER 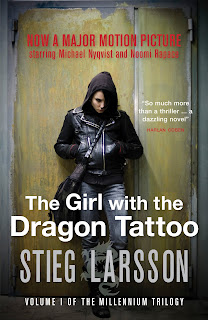 The Millennium Trilogy is a publishing phenomenon with over 22 million copies sold worldwide
The Girl with the Dragon Tattoo has sold over 180,000 copies in Australia and New Zealand and has been in the local bestseller lists for months. Those many of us who have read and loved this book are not at all surprised about this.

The movie – opening in New Zealand cinemas on Boxing Day 2009 – is most likely to increase the awareness of the
trilogy even further, bringing it to the attention to a whole new audience.
The film adaptation stars Michael Nyquist and Noomi Rapace and has already grossed over $100 million
at the box office in Europe.

Praise for The Girl with the Dragon Tattoo

"....what a triumph. I quickly became totally immersed in the complex plot and seduced by the wonderfully drawn characters and the evocative sense of place."
Beatties Book Blog

‘The plotting and pacing are masterful. No wonder Europe has gone wild over Blomkvist and his riveting
sidekick’ – The Sydney Morning Herald

‘Larsson sends out the tendrils of plot, until the tales become one ... Larsson adeptly weaves in ...
diversions and subplots that heighten the intrigue’ – The Age

‘(Lisbeth Salander) is a wonderful creation’ – The Daily Telegraph

Author Profile
Stieg Larsson was the editor-in-chief of the Swedish anti-racist magazine Expo. He was a leading expert on right-wing extremist organisations. He died in 2004, soon after delivering the text of the novels that make up the Millennium Trilogy.

Footnote:
For the Bookman's review of The Girl with the Dragon Tattoo at time of publication go here.