Latest news from The Bookseller

Posted by Beattie's Book Blog at 8:59 am No comments:


At last night's Academy Awards ceremony, five of the nine best picture nominees were book-related, and there were plenty of other bookish category nominations as well. But gold statues turned out to be a rare commodity for book-to-film adaptation fans. There were, however, still reasons for readers to celebrate in the face of the La La Land juggernaut and the theatrical--two winning movies were adapted from plays--surprise twist ending. Among the Oscar winners:

Posted by Beattie's Book Blog at 8:53 am No comments:


Posted by Beattie's Book Blog at 8:49 am No comments:


Amazon's previously-announced 5,800-square-foot bookstore at Legacy Place in Dedham, MA will open on Tuesday, after holding a preview on Saturday. As previously announced, This is Amazon's first bookstore to open on the East Coast (and fourth to open so far), with at least three more "coming soon" in Lynnfield, MA; Paramus, NJ; and Manhattan's Columbus Circle.

Waterstones is receiving criticism in British media for small-town bookstores they have opened over the past 3 years, charged with "posing as independent bookshops to avoid the backlash against the homogenization of Britain's high streets," the Guardian writes. The stores, which are in Rye, Southwold and Harpenden, notify customers of their corporate affiliation with only a handwritten note in the window. Critics argue that the local communities would have rejected the arrival of another chain store. But none of these stores is new: The Southwold Bookshop opened almost 3 years ago; the Rye store followed in mid-2015 and the Harpenden store opened in April 2016. Some independent booksellers did speak out when the Southwold store opened.

In addressing the controversy on BBC Radio, Waterstones' managing director James Daunt essentially conceded the argument: "We are coming into quite sensitive high streets with predominantly independent retailers on them and we wish to behave as they do." The subterfuge is ok, because people like the stores: "The vast majority [of people] have welcomed them greatly. They are very small shops in towns that had independents and very much wish they still had independents but don't." He added later, "Part of the reason we did it is to convince our own booksellers that they have the autonomy that they do have."

The Lit Bar, the bookstore and wine bar Noelle Santos plans to open in the Bronx has hit its crowd funding goal. With three weeks left in the Indiegogo campaign, the project has already raised more than $100,000.

The Bookstore, the only bookseller in Elko, Nevada, has closed, citing its inability to compete with Amazon and the Internet as the reason.


People, Etc.
Kari Sutherland has joined Bradford Literary Agency as an agent. Previously she was an editor at Harper Children's.

Bestselling Australian children's book author Mem Fox, 70, is giving a face to the excesses of border control under the Trump administration. Now back in Australia, Fox told the media that she was detained and interrogated for two hours at Los Angeles Airport in early February, while traveling to a literary conference in Milwaukee, accused of having the wrong visa. (US officials were in error; Fox has visited the US more than 100 times in the past without incident.) She told Australia's The Advertiser, "The way I was treated would have made any decent American shocked to the core, because that's not America as a whole, it really isn't. It's just that people have been given permission to let rip in a fashion that is alarming." She noted, "I am old and white, innocent and educated, and I speak English fluently. Imagine what happened to the others in the room, including an old Iranian woman in her 80s, in a wheelchair."

She told ABC in Australia, "I have never in my life been spoken to with such insolence, treated with such disdain, with so many insults and with so much gratuitous impoliteness." Fox added, "The entire interview took place with me standing, with my back to a room full of people in total public hearing and view — it was disgraceful. I felt like I had been physically assaulted which is why, when I got to my hotel room, I completely collapsed and sobbed like a baby." Fox will likely never visit the US again after feeling like "a prisoner at Guantanamo Bay."

Picks
Target announced their book club selections for March, April, and May all at once The Atomic Weight of Love by Elizabeth Church is the March pick; The Girls In The Garden by Lisa Jewell is the choice for April; and The One Memory of Flora Banks by Emily Barr is the May selection.

In addition, the March Pennie's Pick at Costco is A Man Called Ove by Fredrik Backman

Posted by Beattie's Book Blog at 8:47 am No comments:

15 best classics books of all time

The ancient classics can still teach us about love, politics, history and legend. We pick the must-reads

Best antiquity books of all time (clockwise from top left): Homer, The Last Days of Socrates, Pindar, The Politics by Aristotle
More at The Telegraph
Posted by Beattie's Book Blog at 8:57 am No comments:


Anyone even remotely interested in book publishing knows who the Big Five trade publishers are—if not necessarily in what order they rank. For the record, Penguin Random House sold the most units through NPD BookScan outlets last year, followed by HarperCollins. Simon & Schuster was in third place; last week, S&S reported that its worldwide revenue was $767 million in 2016, down 1.8% from 2015. The Hachette Book Group was #4 in units sold in 2016, a total that includes units from the Perseus Books Group, which Hachette bought last March. Macmillan rounded out the top five.
What is more of a mystery is which is the sixth-largest trade house. The company that finished behind the Big Five in 2016, based on unit sales made at retailers that report to BookScan, was Scholastic.
Read more
Posted by Beattie's Book Blog at 8:51 am No comments: 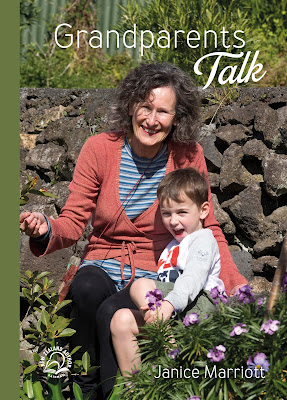 
What does it mean to be a grandparent in New Zealand society today? What is it that keeps families and communities functioning? Continuity? Trust? Love? Janice Marriott, award-winning author and, more importantly, grandmother decided to find out …


Grandparents Talk contains frank, sometimes astonishing, inspiring and thought-provoking interviews with a cross-section of New Zealand grandparents. We discover the variety of grandparents in our diverse society, the heartbreak and the hilarity, and just how indispensable grandparents are. Photos of the featured grandparents, and gorgeous pictures and paintings of grandparents by school children, adorn the pages.


‘The urge to write a book about grandparents came to me when I was looking at sculptures on a Sculpture Walk and a friend was reading to me words associated with the sculptures. A girl, maybe three years old, and a woman, maybe 60, were listening, the grandmother with her hand on the girl’s shoulder. I noticed that the girl’s ponytail was pulled through a hole in the top of her sun hat. This made me smile at the grandmother, and she understood my smile. She told me the hole was her way of keeping the girl’s hat on. Just an ordinary interaction on a hot day, but its ordinariness seemed to me so extraordinary: the practicality of the grandmother, the shared love — conveyed by that hand on her granddaughter’s shoulder — and we two grandmothers acknowledging each other.


‘I set out to explore more of these extraordinary ordinary moments. I chose to do this by interviewing, face-to-face, a variety of grandparents. None would think they were extraordinary, but they all were,’ says Janice.


Most grandparenting doesn’t feature in the formal statistics. As these grandparents talk, their words reveal the varied and often heroic role that grandparents play in today’s families: the heartache of long-distance grandparenting, the sacrifices some people make to keep their grandkids safe and well, the sports coaching, the school pick-up, the concerns about the future. This book shows how and why grandparents do this work, and celebrates the unique bond between themselves and their grandchildren.


‘Of course we lose the intensity of the relationship as the grandchildren grow. They crack open that fragile shell of our love and escape, as independent as newly-hatched crocodiles, into a new world that doesn’t care about grandparents at all. But it doesn’t stop us from adoring them, treasuring their every moment, the times when we feel we have cheated old age, been born again, and have a foothold on the rock of immortality.’ — Janice Marriott


Janice Marriott is an award-winning writer of novels, memoir and children’s books, and a columnist, a writing tutor and a grandmother.
Posted by Beattie's Book Blog at 8:41 am No comments:


Posted by Beattie's Book Blog at 8:34 am No comments: