Brett McGregor: The birth of a celebrity chef 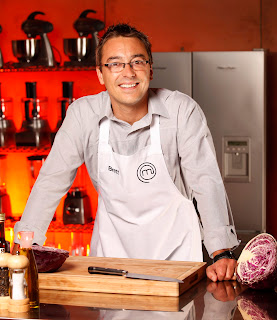 Instead of fading from the limelight, New Zealand's first Masterchef Brett McGregor, has become more of a household name with the upcoming release of his first cookbook called Taste of a Traveller.
Where are they now? It's so often the public catch-cry following reality TV shows. A young unknown is snapped from obscurity into the bright lights and fierce heat of competition, to win 15 minutes of fame in their chosen field of music/modelling/cooking only, more often than not, to disappear back into obscurity just as quickly. 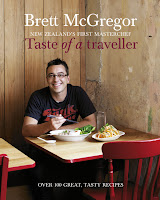 But for New Zealand's first MasterChef winner Brett McGregor the past year has been a whirlwind of food demonstrations, TV gigs with Countdown, training, starting a new weekly food column for New Idea and crucially, putting together his first cookbook, Taste of a Traveller (Random House, $55) out on Friday.
And as of February 22 he's been working in a kitchen - and a house - hit hard by the Christchurch earthquake. "The kitchen is in one piece now, cleaned up and ready to go, apart from some wonky and splitting floorboards, but after the earthquake the bench was in the middle of the room."
The rest of his house is liveable but in need of major repair, with cracked and broken foundations, walls and ceilings.
"The damage is more than $10,000 which means we have to wait to get it fixed and we don't really know for how long - but we were lucky really."

With family and friends all safe accounted for McGregor turned his attention and cooking skills to helping well-known Christchurch chef Johnny Schwass, whose own restaurant was reduced to rubble, feed the homeless in shelters.

It's a tumultuous time to find yourself promoting your first cookbook, but the publication of Taste of a Traveller is the realisation of one of McGregor's most long-held dreams.

The Random House book deal came as part of his MasterChef prize package, but that didn't lessen the level of work involved in producing it.
Much of 2010 was spent gathering and refining the recipes he wanted to put in it, taking recipes he loved from Southeast Asia and parts of Europe, making them accessible to Kiwis, and able to be recreated in home kitchens.
"The recipes in here are really simple because that's how we cook and eat at home - and they can be done by kids because Jack (McGregor's 7-year-old son) helps."
His brief for the book, even while he was on the show, was to celebrate the food of his own travels and the way food ties us to new experiences and sensations.

Read the full piece at New Zealand Herald.
Posted by Beattie's Book Blog at 8:14 am