Posted by Beattie's Book Blog at 3:43 pm No comments:

The Snow Farmer - John Lee of the Cardrona Valley 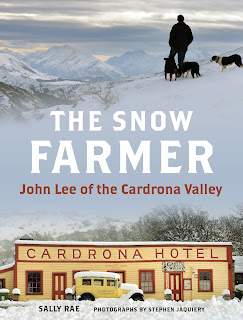 
“John’s story is one to inspire others. It’s a story of a man with a vision, and the strength of personality and the strong relationships with others to make it happen. It’s a Kiwi story of
grit and determination of which we can all be proud.” –
Helen Clark, Former Prime Minister of New Zealand (1999-2008).


John Lee has always been a law unto himself. Entrepreneurial, inventive, determined, he
hailed from a farming background in the Cardrona Valley; the third of five boys. Schooled
in Oamaru, the young John Lee was no fan of the classroom – he was good at maths, but
struggled with words– preferring to spend his time dreaming about the day he would farm
in his beloved Cardrona Valley.


What grew from John Lee’s humble childhood dream is an extraordinary, pioneering New
Zealand enterprise. The story behind Lee’s passion and vision for turning a remote Central
Otago valley into a thriving settlement and tourist destination, is inimitably Kiwi in its audacity,scope and can-do spirit.


The Snow Farmer tells the rollicking adventure story that is John Lee’s life. A visionary
par excellence, Lee’s mantra has always been to build it first, answer questions later. Farming in the Cardrona Valley, Lee saw families moving out of the valley, threatening the viability of the school bus. His answer? An opportunity to enliven the valley by developing a commercial ski field, ignoring geography and bureaucracy to make it happen. His enthusiasm for the project and ability to inspire others, brought people and money to the table, enabling Lee to breathe new life into the valley and rescue it back from the brink.


The Cardrona Valley of today is world-class tourist destination for Olympic skiers, international and domestic adventure travellers. Having also saved the iconic Cardrona Hotel from dereliction, preserving it until a suitable purchaser could be found, he turned his energy into the Snow Farm cross-country ski area. From here, he created an opportunity
for the Pisa Range to be developed as a cold product testing ground. With his intrepid and supportive wife Mary, this entrepreneurial visionary opened his slice of the Pisa Range to international tyre and car developers with ice tracks and snow roads for development and safety testing of motor vehicles; the first of its kind in the southern hemisphere. More recently, with son Sam, they developed the world’s first dedicated terrain park resort.


John Lee was honoured this year with a CNZM (Companion of the New Zealand Order of
Merit) for his services to business and tourism. His story is one of a quiet achiever, a humble man who flies under the radar but who has brought adventure tourism to so many.


The Snow Farmer is a stand-out book about a Kiwi legend. Written by esteemed
journalist Sally Rae, the book is complemented by Stephen Jaquiery’s stunning photographs.


Posted by Beattie's Book Blog at 3:37 pm No comments:


On July 12, Fonsie Mealy Auctioneers will be offering for sale the collection of signed and limited Modern First editions assembled by Dr. Philip Murray. The sale will be at the Gresham Hotel, O'Connell Street, Dublin.

Ever since Philip Murray’s earliest years in Nenagh, Co. Tipperary, he has been an avid reader and collector of books. Starting with the Dandy and Beano comics, he progressed easily to more serious literature, aided by the discovery when a student in Dublin and later Galway of the great variety of second-hand bookshops to be found in both cities. While working in Australia he became a serious collector and also discovered the works of novelist Patrick White.


Murray’s main interest has always been twentieth-century literary fiction and poetry, and over many years he has built up an impressive range of books by some of Ireland’s most significant poets and novelists, as well as the best of British, American (North and South) and European authors.


In addition to frequenting second-hand bookshops wherever he went, Murray has always made full use of specialist catalogues. Through attending book readings and literary festivals, he met and befriended many authors. The London book dealer and publisher Bernard Stone of the Turret Press became a special friend.


Murray specialised in collecting signed copies of first editions. When in 1980 Sean Golden and Peter Fallon published an anthology of the work of thirty-six living Irish writers under the title Soft Day, Murray set out to get his copy signed by all the contributors.


In his memoir Adventures of a Book Collector, published in 2011 by Currach Press, Murray writes with the zeal of a true devotee of the thrill of the chase, the delights of reading, and the many adventures and friendships his passion has brought him.


Murray has now retired after many years as a general practitioner in Sligo, and the advent of internet buying has taken away much of the pleasure of book-hunting. Accordingly, he has decided to part with his very personal collection, assembled over half a century and more. It includes about 2,200 American and British first editions, of which about 75% are either signed or inscribed, and the works of many prominent Irish writers, besides some five hundred letters.


A valuable prayer book that once belonged to William Wordsworth has been stolen from a Lake District church. The book was taken from a display cabinet in St Oswald's Parish Church, Grasmere, last week. The prayer book, which dates from 1835, was removed from the cabinet after the glass was smashed, and then taken from the church premises. Police have now alerted antique & book dealers around the country to look out for it.

The team from Cambridge University Library will be in the Make and Create Tent at The Big Weekend
on Parker's Piece, to explore the mythical stories of ancient Greece. You are invited to make your own
papyrus scroll to take home, and decorate it with your own epic, magical tales. This event is being
generously supported by the Heritage Lottery Fund.


A first edition of The Book of Mormon printed in upstate New York and linked to Joseph Smith's establishment of the Church of Jesus Christ of Latter-day Saints has sold at auction for more than $50,000. Swann Auction Galleries says the rare 1830 edition was sold on Tuesday for $52,500.

The buyer’s name was not released. The item had an estimated pre-sale price of $40,000 to $60,000. The auction house says the first edition of the scripture of the LDS church was released just days before the church’s official establishment in early April 1830.
———————————
To Contact Ibookcollector
Ibookcollector © is published by Rivendale Press
Posted by Beattie's Book Blog at 3:37 pm No comments:

Posted by Beattie's Book Blog at 6:48 am No comments: