Pyre of Queens is the first of the Return of Ravana series, and has a dual storyline set in India 769 AD and 2010.
The Lost Tohunga is the third book in the Bone Tiki series. 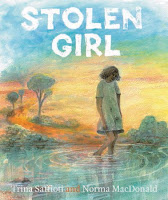 Wellington author Trina Saffioti will launch her second Stolen Girl, a fictionalized story of a child of Australia's stolen generation, to whom Trina has ancestral ties.
Trina's first book was the critically acclaimed The Old Frangipani Tree at Flying Fish Point.

Both these books were published by Magabala Books, Australia's oldest independent Indigenous publishing house. Based in Broome, Western Australia, they must also be one of the remotest publishing houses in the world.

Barbara Else -The Travelling Restaurant

Barbara Else, Gecko Press and The Children's Bookshop are launching Barbara's new children's novel The Travelling Restaurant to be launched by special guest, editor Jane Parkin.

Any one wishing to attend any of these events is welcome, please rsvp to
The Children's Bookshop
Shop 26 Kilbirnie Plaza
Kilbirnie
Wellington