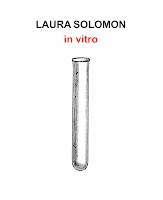 "HeadworX is pleased to announce the NZ Book Month publication of in vitro, the debut collection of poems by well-known New Zealand writer Laura Solomon.
Solomon was one of the stars of the new wave of young New Zealand writers in the 1990s before leaving New Zealand to live in England for a number of years. She returned to New Zealand in 2007 and currently lives in Nelson.

in vitro presents fresh poems on a wide variety of subjects from in vitro experiments, vampire bats, Janet Frame and earthquakes to Pythia getting the blues and Guy Fawkes giving his sincerest apology.
Solomon is one of our most gifted writers.

“Witty, clear-edged, both lemon-sharp and seductive,
Laura Solomon is a writer to watch.” – Maggie Gee,
Chair of the Royal Society of Literature

She has twice won a prize in the Bridport competition and has won prizes in the Edwin Morgan International Poetry competition, the Ware Poets competition and Essex Poetry Festival competitions. The two sequels to Solomon’s novel Instant Messages (which won the Hong Kong “Proverse Prize 2010” and was short listed the Virginia Prize) are ‘The Theory of Networks’ and ‘Operating Systems’, and have been accepted as e-books by Proverse Publishing, Hong Kong. Her new novel ‘Hilary and David’ has also been accepted as an e-book by Proverse Publishing, Hong Kong.

Thank you for mentioning "Instant Messages". Information about this entertaining look at a disfunctional UK family is available on our website, proversepublishing.com and it is quickly available in NZ (as are many of our books) from fishpond.co.nz. Two excellent finalists in the same round of the Proverse Prize for unpublished writing will be published on Wednesday this week: and the 2011 Entry Form, etc. for the competition will be uploaded after that. In the meantime,the 2010version is still available for guidance to those who would like to enter this year.