Writers in prison: when having an opinion becomes a crime


There's an apocryphal story about Picasso, who was asked to subscribe to a fund for getting Soviet writers out of prison, but refused. They write better in prison, said Picasso. Oddly enough, in the more recent case of Jeffrey Archer, he would have been right.

Leaving aside Lord Archer and the Russians for a moment, when you come to examine Britain's library of prison books, the pickings are surprisingly slim. In the English tradition, I think there are just three manuscripts directly attributable to the clink: John Bunyan's Pilgrim's Progress, Oscar Wilde's De Profundis (and "The Ballad of Reading Gaol"), and Money in the Bank by PG Wodehouse, written during his internment in Nazi Germany.

Still, from Shakespeare to Byron, self-expression always came with some fear of reprisal, and the list of English writers whose work has been shaped, however slightly, by the prison cell includes Thomas More, Walter Raleigh, Daniel Defoe and Charles Dickens. Arguably, his father's tenure of the Marshalsea (a debtors' prison) was, as much as the celebrated "blacking factory", the novelist's defining experience.

Further afield, in the English-speaking world there were the injustices of the Raj and, later, of apartheid. From South Africa, Breyten Breytenbach's masterpiece, True Confessions of an Albino Terrorist, owes everything to his imprisonment, which takes us back to Picasso's provocative contention.

But here in Britain, for the last 100 years, our literature has been unrestricted. Some homosexual writers might dispute that, but most writers have enjoyed real freedom. What's more, most British readers would say they live in a free society.

Sadly, this has not been the experience of writers, or readers, worldwide. Beyond Bars, the latest issue of Index on Censorship, a co-production with English Pen and edited by Natasha Schmidt, presents a chilling catalogue of literary repression in our time, from China's Nobel laureate Liu Xiaobo, to Orhan Pamuk (Turkey), Faraj Sarkoohi (Iran) and the murdered Anna Politkovskaya (Russia). 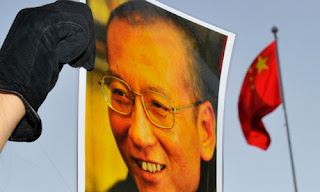 A protester holds an image of jailed dissident Liu Xiaobo outside the Chinese Embassy in Oslo. He is one of many imprisoned writers. Photograph: Toby Melville/Reuters

Robert McCrum's full, thoughtful essay at The Observer.
Posted by Beattie's Book Blog at 5:38 am

Is there a New Zealand chapter of PEN, (http://www.internationalpen.org.uk/) the international organisation works (rather like Amnesty International) to bring attention to the plight of writers in prison? I belong to Melbourne PEN and spend a little of my time writing letters to repressive African governments in the hope of change there, with occasional success thanks to many others who do the same around the world. 'When there is little one can do, it is good to do the little that one can'.
Best wishes
Lisa Hill, ANZ LitLovers, Melbourne Australia