With funding from its founder now at an end, the prize is inviting suggestions from readers on how it should move into the future 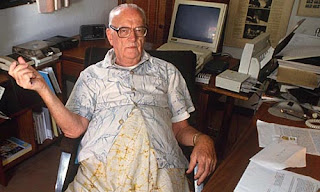 
The prestigious British science fiction prize, the Arthur C Clarke Award, is facing "an immediate and pressing need for change", with official funding from its founder, Clarke himself, now at an end. The prize's administrator Tom Hunter has thrown open the question of what comes next in an open letter to science fiction fans this week, and asking for their views on its future.


The award, established by Clarke in the 1980s, goes annually to the best science fiction book published in the UK, and was awarded this year to China Miéville's The City and the City, an unprecedented third win for the author. Margaret Atwood was the first winner with The Handmaid's Tale in 1987, with other notable recipients including Amitav Ghosh (The Calcutta Chromosome, 1997), Christopher Priest (The Separation, 2003) and Neal Stephenson (Quicksilver, 2004).

The award has always been run on a voluntary basis, with the funding going to support a cash award matched to the year (so this year the prize money was £2,010). But since Clarke's death in 2008, and the winding-up of his UK company Rocket Publishing, which funded the prize, the money has come to an end.

Hunter said the 2011 Award, which will mark the prize's 25th anniversary, will definitely go ahead "one way or another", but that new arrangements will need to be made for subsequent years.
More at The Guardian.
Posted by Beattie's Book Blog at 6:33 am