The surprising potential of a prison library 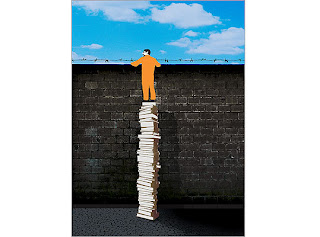 Every day, for the almost two years I worked as a staff librarian at the Suffolk County House of Correction at South Bay, the pattern was the same: Seconds after they were released from their units, inmates would not walk, they would run — as though catapulted — towards the prison’s library.

Many inmates, especially those in a hurry, arrived with some specific order of business. They would grab a book of case law, or they’d check out a newspaper or magazine and take a seat at the library’s long table. They might disappear into the labyrinth of bookshelves. Many would line up to speak with me. They’d pose legal questions, talk about their families and health concerns, describe their spiritual and educational quests. Time and resources were short, and the needs were urgent. The library was a site of activity, of perpetual motion.

In the public debate about our penal system, prison libraries tend to be a point of controversy. Some critics worry that tax money is misspent on coddling convicted felons. Some go further, and stoke public fear that prison libraries are giving violent convicts access to materials that will incite them. The concept of books in prison has been contentious since at least the

19th century, when prison chronicler Enoch Cobb Wines wrote that some government officials considered prison libraries to be “of doubtful influence.” There is a direct lineage from the 19th-century debate to a Connecticut politician’s recent proposed purge of state prison libraries based on the supposedly nefarious influence of certain “disgusting” novels.

The problem with the public discussion about libraries in prison is that it’s the wrong discussion. For over a century now, the debate has centered on reading — on which books should, or more often should not, be included on the prison library’s shelves; which books are “harmful” or “helpful”; whether reading is a privilege or a right. In 1867, Wines argued that a book like “Robinson Crusoe” — at the time, the only secular novel permitted in prison — served the cause of criminal rehabilitation. Others fervently disagreed.

But the issue of reading is only one dimension of the question, and not necessarily the salient one. The crucial point of a prison library may not be its book catalog: The point is that it is a library.

Read the rest at the Boston Globe.
Posted by Beattie's Book Blog at 12:42 pm