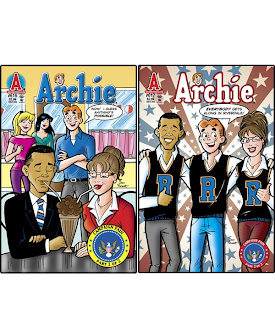 When Archie Andrews and Reggie Mantle are opponents in the race for student body president, each candidate channels one of the most well-known figures in American politics: Archie goes blue with Obama while Reggie goes red for Palin. Soon the real life politicians visit the young politicians.

In an interview with The Huffington Post, co-CEO of Archie Comics, John Goldwater said: “Archie’s adventures are happening now, in a world where Obama is president and Sarah Palin is the de facto leader of the Republican Party. Bringing Obama and Palin to Riverdale sprung from a great idea we had and rolled from there … It’s simple – even people with opposing views can find common ground if they truly want what is best for this country.”
The first part comes out on December 22, 2010 and the conclusion will be available on January 26, 2011. Long-time Archie Comics writer and artist Dan Parent illustrated these two issues. GalleyCat will soon post an interview with Parent about his new character creation, Kevin Keller.
Posted by Beattie's Book Blog at 10:48 am

The cover on the first comic book is funny...can't imagine that happening in real life.