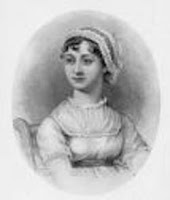 The writer sent the book, shortly after it was published in 1815, to fellow novelist Maria Edgeworth whose family put it up for sale at Sotheby's in central London.

Austen was a great admirer of Edgeworth, who is regarded as one of the pioneers of the historical novel in English literature, but letters written at the time make it clear Edgeworth was not a fan of the book.

In a letter to her half-brother Charles Sneyd Edgeworth, she wrote: "There was no story in it, except that Miss Emma found that the man whom she designed for Harriet's lover was an admirer of her own & he was affronted at being refused by Emma & Harriet wore the willow and 'smooth, thin, water-gruel' is according to Emma's father's opinion a very good thing & it is very difficult to make a cook understand what you mean by 'smooth thin water gruel'!!"

The story of the spoiled young woman who fancies herself as a matchmaker has been adapted for film and television several times, with actresses including Gwyneth Paltrow and Kate Beckinsale in the title role.

The plot also provided the basis for the 1995 film Clueless starring Alicia Silverstone that transferred the story to modern-day Beverly Hills.
Posted by Beattie's Book Blog at 7:45 am