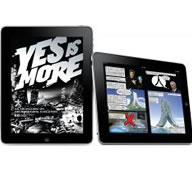 Taschen is to publish its first app this week, a re-release of architectural title Yes is More.

Exclusive to the iPad, the £5.99 app will be launched on the iTunes App Store this week. The illustrated publisher appointed its first digital director Julius Wiedemann last month.

Yes is More comprises the original 400-page "archicomic", which sets out the radical agenda of Danish architectural practice Bjarke Ingels Group (BIG) in comic-book form. It also includes updates of building projects the Danish Pavilion at the Shanghai Expo and the 8 House in Copenhagen, details of three new constructions, 25 videos and 360° images of BIG exhibitions.

The app will be launched at Taschen's Copenhagen store on 22nd December. It will also update with new information and projects as they develop.

The £17.99 paperback was published in December 2009, and has undergone four reprints.
Posted by Beattie's Book Blog at 5:24 am