Retailers have lost tens of millions of pounds after snow devastated what was supposed to be the busiest shopping day of the year a week before Christmas.
By Alastair Jamieson in The Telegraph, 18 Dec 2010 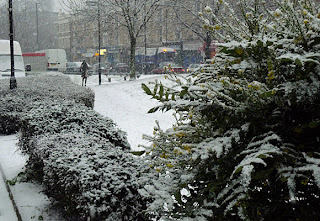 Blizzards and icy conditions meant many shoppers abandoned their trips while some stores were forced to close.
Brent Cross shopping centre in North London, one of Britain’s biggest, was forced to close on Saturday afternoon, losing trade worth up to an estimated £5m.

In some supermarkets there were long queues and empty shelves as shoppers began to panic buy amid fears food supplies would not reach stores in time for Christmas.
One of Britain’s biggest hauliers said empty shop shelves were "inevitable" in some areas as stranded lorries were unable to make deliveries.

It was supposed to have been 'Super Saturday' bonanza for retailers, with Britons due to have splurged an estimated £4bn on Christmas food and gifts.

Full story at The Telegraph.
Posted by Beattie's Book Blog at 6:46 am