The Daily Beast
Three entertaining novels: an epic, wry account of Brits in the Balkans during WWII, a gripping murder mystery in a Southern town, and what Marilyn Monroe's dog, Maf, saw. 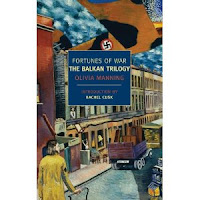 The Balkan Trilogy
By Olivia Manning

No young man dreams of growing up to be a lecturer for the British Council. But when I first stumbled across Olivia Manning's Balkan Trilogy in graduate school, I was ready to be signed up. At nearly a thousand pages, Manning's three novels are a sweeping story of marital love, English manners, and Balkan intrigues, set against Europe's descent into the Second World War. Harriet Pringle, bright and self-confident, joins her husband, Guy, in Bucharest, Romania, where he teaches English at the local university as part of a British cultural program. "Anything can happen now," Harriet thinks as her train chugs eastward, somewhere beyond Venice.

The world is both wide open and rapidly closing down in the fall and winter of 1939-1940, as refugees flood into a Balkan capital already teeming with dinner-suited nobles, penniless peasants, and a motley collection of hangers-on, ne'er-do-wells, Nazi schemers, Romanian fascists, and hounded Jews. At the English Bar in the Athenee Palace Hotel, a parade of exotics makes its way through the gin-tinged haze: Yakimov, the Irish-Russian sponger and alcoholic scion of two drinking cultures; Romanian politicians and their mistresses; and the buttoned-up men of the British legation, pursued by rumpled foreign correspondents. Outside, Romanian children offer themselves as prostitutes, while horse carts carry away the clustered bodies of dead beggars, frozen together in a vain attempt to escape the biting Balkan winds.

All this was part of Manning's own life. English by birth and Anglo-Irish by education, Manning was a painter and writer of minor distinction who, in 1939, married her own version of Guy Pringle. For the remainder of the war, she and her husband managed to keep just ahead of the Nazi armies, fleeing first to Greece and then to Palestine. Like Harriet, she knew both the thrill of adventure travel as well as the niggling dissatisfaction of confining love—the resigned devotion of a talented woman married to a man whose magnanimity and attention were usually directed elsewhere, "a husband made unreliable only by his abysmal kindness," as she wrote of Guy.

More at The Daily Beast.
Posted by Beattie's Book Blog at 6:32 am