Writer Races to Victory From Way Off the Pace 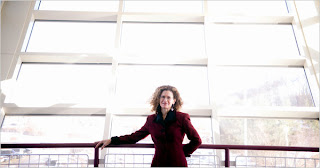 Jaimy Gordon at Western Michigan University, where she has taught for almost 30 years. Photo - Erik Holladay for The New York Times


Jaimy Gordon’s novel “Lord of Misrule,” which won the National Book Award for fiction last month, was such a long shot that even Ms. Gordon and her publisher, Bruce McPherson, didn’t think it had much of a chance. Ms. Gordon wore an old dress to the award ceremony and didn’t bother to prepare any remarks. On learning that the book had been selected as a finalist, Mr. McPherson, the owner and sole full-time employee of McPherson & Company, a tiny press in Kingston, N.Y., only reluctantly upped the print run to 8,000 copies, from 2,000.

Ms. Gordon, 66, has taught writing for almost 30 years at Western Michigan University and lives by herself in a two-story house next to a lake here. Her husband, Peter Blickle, 17 years her junior, teaches German at the university and lives by another lake, about a 20-minute walk away. His wife goes over there most evenings with her dog and they have a glass of schnapps.


Ms. Gordon, who has a graduate degree in writing from Brown but also spent time working at a racetrack and briefly lived with an ex-convict who set fire to their apartment, has never been very conventional. She has a huge corona of springy, tightly curled hair that suggests prolonged exposure to a light socket, and a personality to match: forthright, disarming, uncensored. She is a wiser, chastened version of the reckless young female character who turns up in many of her books and never misses a chance to endanger herself.
Full story at New York Times.
Posted by Beattie's Book Blog at 6:51 am