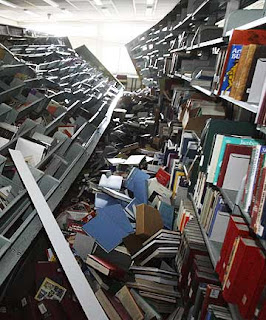 Tagging Time: Canterbury University will tag its library books with radio-frequency identification (RFID) chips before putting them back in order.

Canterbury University has decided that as most of its 1.3 million books fell off shelves during September's earthquake, it will take the opportunity to tag them with radio-frequency identification (RFID) chips, before putting them back in order.

The tags will let students quickly check books in and out of the library themselves, and it will mean "missing" books can be found on shelves using wireless handheld "wands". Melbourne firm FE Technologies which won the contract to install the RFID system, said it could tag 800,000 books by the new academic year.

Auckland's Botany Downs Library was the first public library in New Zealand to tag its books with RFID chips in 2004 and the technology has been steadily catching on. FE won a $2m contract earlier this year to tag books and install RFID systems at Christchurch's public libraries, which suffered less disruption than the university's from the quake.

In October, Upper Hutt library became the first in the Wellington region to tag its books with RFID chips. Wellington Libraries manager Jane Hill said the installation of RFID systems at its 11 libraries had been budgeted for in 2013-14.
Posted by Beattie's Book Blog at 9:29 am