by Samuel P. Jacobs - staff reporter at The Daily Beast.
He has also written for The Boston Globe, The New York Observer, and The New Republic Online. 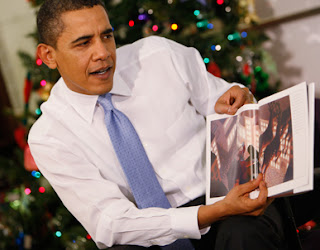 The media claim the president has "lost control of his narrative." So we asked Margaret Atwood, Sam Lipsyte and other fiction masters to offer tips for the president to fix his storyline.

"Presidential politics is about storytelling," Politico's John F. Harris said last year. "No one understands this better than Barack Obama and his team, who won the 2008 election in part because they were better storytellers than the opposition."

But, as the saying goes, you campaign in poetry and govern in prose, and before long, everyone wants to edit.

Take the moment this summer during the Gulf oil spill when Obama seemed upended by calamity. "He'd better seize control of the story line of his White House years," opined Maureen Dowd. "Woe-is-me is not an attractive narrative."

Click on cable television or flip to the opinion pages, and you'll discover that whenever things aren't going the president's way, it's because he has lost control of the narrative. In other words, the Obama camp is desperately in need of a re-write.

But rather than listen to the political journalists, who rate the president like National Book Award judges, we decided to ask some veteran novelists for a few hints of how to improve his plot in 2011.

Sam Lipsyte, author of The Ask, said it's time for Obama to look at his earliest chapters.

"When I am writing and floundering, with no sense of where to go, I look back to the beginning of what I am working on, and ask: Where did I start? What set this all into motion? Obama could do the same with his novel, of which we are all characters," he wrote in an email.

"The answer would be, 'Oh, yeah, I promised change, I promised to fight some very righteous fights, I gave my supporters [the reason] to believe that I would be tough enough, or at least magical enough, to rout the armies of the evil Republican wizards, even though I would try to be nice first.'
Then I think he would 'find' his 'narrative,' and perhaps find the will to finally go berserk on these thugs, these goons of the oligarchy, and save the kingdom of the middle class. And people far and wide would say, 'Have you read Obama's latest? It's a great read!' He might even get on Oprah. In short, when you lose something, it's usually where you've been, not where you think you're going."
Full story at The Daily Beast.
Posted by Beattie's Book Blog at 10:53 am