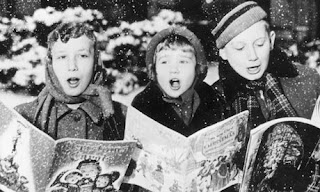 That beautiful carol 'In the Bleak Midwinter' is based on a poem written by Christina Rossetti in response to a commission from the magazine Scribner's Monthly for a Christmas poem in 1872. One hopes they paid well.
The lines of one of my predecessors as poet laureate, the Irish poet Nahum Tate, are on our lips still when we sing the lyrics of 'While Shepherds Watched Their Flocks by Night', written by him in 1703 – though usually changed to 'washed their socks' by most school-children.
Carols, according to the 1928 edition of The Oxford Book of Carols, are 'simple, hilarious, popular and modern'. They are a kind of folk song where direct poetry and accessible music eagerly meet. The oldest of our carols date from the 15th century and 'give voice to the common emotions of healthy people in language that can be understood'.
I hope that by this time next year some of these sparkling new poems for carols will have been set to music.
On behalf of all the poets here to you, their readers, I wish you a very happy Christmas.
Carol Ann Duffy

Silently on Christmas Eve,
the turn of midnight's key;
all the garden locked in ice –
a silver frieze –
except the winter cluster of the bees.

Flightless now and shivering,
around their Queen they cling;
every bee a gift of heat;
she will not freeze
within the winter cluster of the bees.

Bring me for my Christmas gift
a single golden jar;
let me taste the sweetness there,
but honey leave
to feed the winter cluster of the bees.

Come with me on Christmas Eve
to see the silent hive –
trembling stars cloistered above –
and then believe,
bless the winter cluster of the bees.

Carry the child at ease in the womb,
lulled in a cradle of bone and sinew:
a winter child with an escort of songbirds;
a summer child for a winter home.

Carry the child content in your arms.
Carry the child high on your shoulders,
tall as a candle: a radiant torch,
a solar-powered lamp to light a dark room.

Call the child to be dandled with rhymes,
livened with drum-talk, cuddled and calmed
with flutes and fiddles, anthems and psalmody.
Welcome the child with a sky full of chimes.

The full selection at The Guardian.
Posted by Beattie's Book Blog at 7:47 am