A recipe book teaching people how to cook junk food at home has become a surprise Christmas best seller, even trumping Nigella Lawson in the charts.
The Telegraph - By Harry Wallop, Consumer Affairs Editor,17 Dec 2010 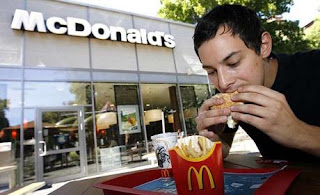 Why go to McDonald's when you can cook an exact replica of a Big Mac at home? Photo: Bloomberg News

The Takeaway Secret, by Kenny McGovern contains detailed recipes about how to cook chicken nuggets, doner kebabs and quarter pounders with cheese.

It contains no photographs, has no television tie-in and is written by a recluse in Scotland.
But it has steadily climbed up the book rankings to hit number 3 on the Amazon list of bestselling food books this week, beating Nigella Lawson's latest book as well as books by Hugh Fearnley-Whittingstall and Nigel Slater.

At one stage it briefly hit the third best selling book in Britain on Amazon, the country's biggest book seller. It was beaten only by Jamie Oliver's latest book, which has become the fastest selling book in Britain of all time and is on course to sell more than a million copies, and the astonishingly successful A Simples Life: The Life and Times of Aleksandr Orlov, the biography of the fictional stuffed meerkat that appears in a television advert.

Only because Amazon ran out of stock did it start to slip back down the charts.

Mr McGovern suffers from social anxiety disorder and agoraphobia, meaning he has over the last decade rarely left his parent's house in Glasgow. But he desperately missed his favourite burgers, sandwiches and curries and set out over five years of research, trial and error to recreate the exact tastes found in KFC, McDonald's, Greggs the Bakers and the local kebab shop.


The book has been hailed on internet blogs, including the influential moneysavingexpert.com website, helping it to become an underground hit.

Xanthe Clay, The Daily Telegraph's food columnist, said: "I find it utterly surreal that people want to recreate the taste of junk food restaurants in their own home. It is just extraordinary. It is the complete antitheses of what Jamie and Nigella have been telling us in recent years about using fresh, quality ingredients. But maybe that's why it has done so well.
"And I am equally thrilled that he has proved that you can produce a bestseller without being on television. It is very heartening."
Posted by Beattie's Book Blog at 6:43 am