a graphic novel from the award-winning designer of Bro-Town 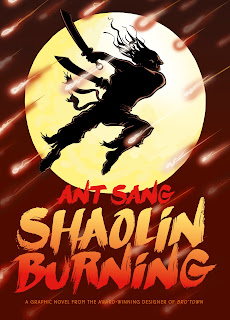 
NZ release - February 2011
Shaolin Burning is an exciting, modern take on kung fu mythology; a fusion of punked-up street culture and Chinese tradition. is a masterful interweaving of kung fu legends, Chinese history and stories of those lost to the past.

When the Shaolin Temple is destroyed by the Emperor’s army, only five monks manage to escape alive. Or so the legend goes.

But few know the story of the sixth, Monk Who Doubts, who turns his back on the Buddhist path and embarks on a bloody trail of revenge; culminating in a devastating showdown with the Emperor’s forces.

Fewer still know the story of Deadly Plum Blossom. Unwanted at birth, she is rescued and raised by a Shaolin nun. Trained all her life in a new fighting style, she is determined to prove herself, and sets off to challenge Monk Who Doubts, the most dangerous man in China.

There was a lot of historical research involved in writing and illustrating this story. Ant Sang researched the 16th century of China (the Qing dynasty) and also the history and legends of Shaolin kung fu, especially regarding the destruction of the temple by the ruling soldiers. He also researched the origins of Wing Chun kung fu.

About the author:
As one of the original key creatives of bro’Town, Ant Sang was responsible for designing the characters and locations of the show for its entire five series. In 2006 and 2008 he won the Achievement in Production Design award at the Air New Zealand and Qantas Screen Awards for my work on the show. His comic book series, The Dharma Punks, received awards, rave reviews, and a cult following in New Zealand.

Ant Sang is well-known within the New Zealand comics scene, having been involved since the mid-nineties, self-publishing the Filth series of mincomics and The Dharma Punks series from 2000 - 2003. He is also known within the local Chinese community, having designed logos and artwork for their conferences and spoken at their events. Ant has also taught comic workshops.

After many years of self-publishing comics and mini-comics, and gaining a loyal following in the New Zealand comics scene, Shaolin Burning is Ant Sang’s long-awaited, graphic novel and the first to be released by a major publisher.
Posted by Beattie's Book Blog at 7:31 am