The Library at Pooh Corner 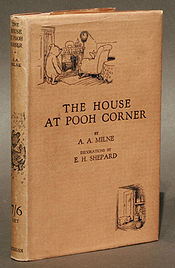 EIGHTY-FIVE years ago this Christmas Eve, The London Evening News published a short story about a boy and a bear written by an assistant editor at Punch named A. A. Milne, thus engendering four children’s books, a slew of films and videos and a merchandising empire estimated to be worth more to the Disney Corporation than Mickey Mouse, Minnie Mouse, Donald Duck, Goofy and Pluto combined.

It also resulted in my finding myself in tears last Christmas in the Stephen A. Schwarzman building of the New York City Public Library.

The story goes back 35 years. In the 1980s, I had a gruesome copy-editing job at E. P. Dutton, the American publishers of the “Winnie-the-Pooh” books. One of my colleagues was a crusty septuagenarian named Eliot Graham, whose title was director of publicity emeritus. Eliot was the shepherd of the original Pooh stuffed animals — Pooh, Tigger, Kanga, Piglet and Eeyore — which were kept in a glass case in the Dutton lobby on 2 Park Avenue.

He’d take them to schools and literary festivals and the sets of early morning news shows. We used to talk about the Pooh animals together, Eliot and I, as if they were members of a rock band, and Eliot their long-suffering manager.
Full piece at New York Times.
Posted by Beattie's Book Blog at 6:56 am