Enid Blyton has fallen out of the top ten list of children's authors for the first time in decades because youngsters cannot relate to her language.
By Laura Roberts , The Telegraph, 17 Dec 2010 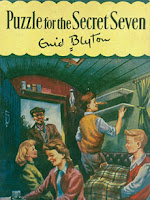 The author of the Famous Five and The Secret Seven has gone from position 8 to 11 in the chart according to the latest figures.

This has also been blamed on the fact that her books have not been made into any blockbuster films.
This year 464,000 copies of her works were sold marking a drop of 17.8 per cent for the period January to October 2010, said Neilsen BookScan.

Stephanie Meyer, (right), the American who wrote the Twilight series, took the top spot followed by LJ Smith, who also writes about teenage vampires.
In third place is Rick Riordan, the author of Percy Jackson and the Olympians series, about a boy who discovers he is the son of Poseidon, god of the sea.
Jeff Kinney and Jacqueline Wilson were placed fourth and fifth.

Despite passing away 20 years ago Roald Dahl remains a favourite with children and is ranked at number 7.

JK Rowling, author of the bestselling Harry Potter novels, saw her ranking fall to 15. She has not written a new book for three years but the latest Potter film releases are expected to significantly swell sales.
Film adaptations are increasingly key to boosting the sales of many modern children's writers.

A spokesman for Waterstones said: "The way the children express themselves in Enid Blyton can be a bit alienating for children today. The way the books are written and the words that are used a not necessarily relatable to nowadays. A lot of words have fallen out of common usage with children. You don't find that with someone like Roald Dahl who remains modern.

"Current writers have the advantage of movie adaptations and TV series and the celebrity that those bring with them. They also are able to generate fresh bouts of publicity whenever a new title is published, or when an author tours bookshops to publicise a new book to fans.

"Enid Blyton has done well to remain so popular after decades of being in print – there is no author with such a wide-ranging backlist who has lasted so long, but this last year has obviously seen her face competition from much younger writers. Blyton relies on her brand and the affection generations of readers have for her, and I am sure that in ten years time she will still be in the top 20 children's writers."

He added: "Roald Dahl (right) benefits from frequent movie adaptations. His stories are also anarchic and undated, ensuring they seem fresh to every new generation discovering them. His language feels very current as well as the stories whereas it could be argued that Enid Blyton seems a bit dated." 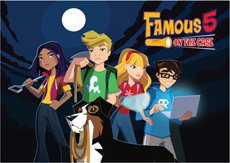 In September this year Hodder published revised editions of the Famous Five which modernised some of the language and the names in order to attract a new generation of readers, although traditional versions are still available.

Words such as "golly", "rather" and "awfully", have been phased out while "Mother" and "Daddy" was replaced with "Mum" and "Dad". 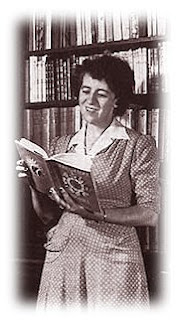 Anne McNeil, Publishing Director for Hodder Children's Books said: "Enid Blyton (right) continually tops the lists of Britain's best-loved authors and is currently the 25th most borrowed of any author. She is a perennial favourite whose popularity endures any fluctuations in the market and we are immensely proud to be publishing her in the 21st century."
Posted by Beattie's Book Blog at 7:21 am