A Life Built on Illusion: More Tease Than Strip 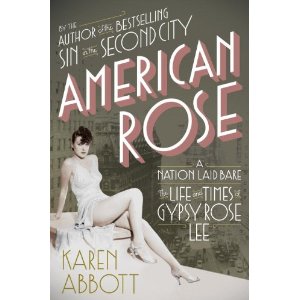 A Nation Laid Bare: The Life and Times of Gypsy Rose Lee
By Karen Abbott
Illustrated. 422 pages. Random House. US $26.

On the theory that the biographer of a stripper needs a tease, Karen Abbott opens “American Rose” with Gypsy Rose Lee on the verge of something big. It’s 1940, and Ms. Lee, known in this book more comfortably as Gypsy, is about to perform at the World’s Fair and cement her status as a national treasure. As proof that Gypsy appealed to patriots of all stripes, Ms. Abbott cites a congratulatory telegram written 19 years later by Eleanor Roosevelt: “May your bare ass always be shining.”

Ms. Abbott compares the Gypsy of 1940 to the enormous “City of Lights” diorama that could be seen at the same World’s Fair. This 4,000-miniature-building construction, Ms. Abbott says, was “a meticulous and spectacular illusion, just like Gypsy Rose Lee herself.” And then, with the stage set for a book that will interweave one woman’s outsize personality with the national character, this author does something unexpected. She retreats to the relative safety of her subject’s childhood, making it clear that she’ll never lay a glove on Gypsy Rose Lee at all.

There was a whiff of the same problem in “Sin in the Second City,” Ms. Abbott’s lively first book, a highly atmospheric portrait of two legendary Chicago madams (the Everleigh sisters, Ada and Minna). Although the Everleighs left a colorful public record, their business was necessarily covert and not fully open to a biographer’s scrutiny. The city’s rich and bawdy ambience helped fill in the gaps.

Gypsy Rose Lee, an accomplished self-promoter who carefully revised and burnished her own image, is even better hidden. So Ms. Abbott tries to treat her subject’s sheer elusiveness as a selling point. Time and again Ms. Abbott repeats one overriding thought, whether it comes out as “she commanded every eye in the room precisely because she offered so little to see” or “she knows that what she hides is as much of a reward as what she deigns to reveal.”