Weeds: How Vagabond Plants Gatecrashed Civilisation and Changed the Way We Think About Nature.
By Richard Mabey. 228 pages. Profile Books. £15.99.


In Praise of Weeds 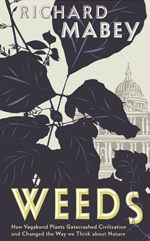 An icy English winter, like the one that has begun this year so early, is excellent, it seems, for Danish scurvy grass, one of the subjects of Richard Mabey's wonderful new book, Weeds, reviewed in the TLS this week by David E. Cooper. Danish scurvy is a garden-invader which should normally stay out of town on cliff-tops and sea walls but, unlike related species, it is genetically equipped to benefit from the use of salt to grit our roads. Hence it is this week moving inland in pursuit of municipal lorries, part of the larger process of natural selection which, Mabey explains, has enabled weeds to prosper, not least by “gate-crashing civilization.”

Weeds have “evolved to grow in unsettled earth and damaged landscapes”–ploughed fields, say, and bombsites. By dint of this, weeds—though they presumably lack “purpose”—have “something close to a role” in the scheme of things: “to stabilise the soil” and otherwise enhance “stable plant systems.” Agriculture and horticulture would have been a “passing fancy” without the assistance of the very weeds that farmers and gardeners have ever since been cursing.

Some weeds are simply plants that we don't like or are in the wrong place. Other weeds—Japanese knotweed and dandelions, for example—really do possess features that dispose them to get into, stay in and take over the wrong places. They are typically invasive, highly adaptive, parasitic and adept at mimicking more benign plants.

Weeds can most usefully be seen, in Mabey's view, as a cultural category of plants. Japanese knotweed, for all its invasive attributes, was an ornamental plant for the Victorians. The knotweed’s problem, these days, is less that of being in the wrong place than in the “wrong culture.” Certainly, Cooper concludes, it is the “cultural profiles” of weeds, as much as their ecological ones, that attract Mabey’s reveries.

The rest at The Daily Beast.
Posted by Beattie's Book Blog at 2:44 pm