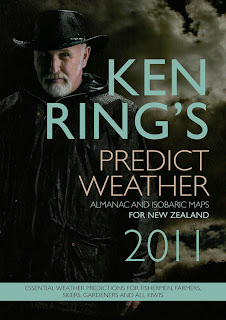 Longrange forecaster Ken Ring, author of the Predict Weather Almanacs, says despite the pre-Xmas rain the drought should continue in the east of Northland through January, then shift to the west of Northland in February and all of Northland for March and April.
Greater Auckland and western BoP also get dry conditions in January as do Rotorua, Taupo and mid and S Canterbury. By February drought spreads to all of BoP, Gisborne, Hawkes Bay, Waikato, Central Plateau, Taranaki, parts of the lower NI, also the top of the SI to Kaikoura.
In March dryness continues in Northland and Greater Auckland, but the rest of the NI gets relief, while the SI goes dry Canterbury southwards. Rain relief in May will leave only eastern BoP and the far south still dry.


January and December may be cloudier than normal, but expect average sunshine in the other months. Ken Ring of PredictWeather says the news stories in 2011 will probably be tropical cyclones in the Pacific, returning after an absence, about 12 forming in all, with about half reaching and affecting parts of NZ, mainly with wind.
The drought will also fill the pages of newspapers, with speculations of relief right up to rain in May.
2011 will see winter temperatures start to ease upwards, similar to 2002 which was a warmer than normal winter for NZ. 2012-2014 are looming to be lean snow years, with snow return in 2016. 2010 may have been the last full ski season before 2016. There may be more snow for the NI in 2011 and SI skifields may not get the season they want.

More on http://www.predictweather.com/
Posted by Beattie's Book Blog at 2:26 pm